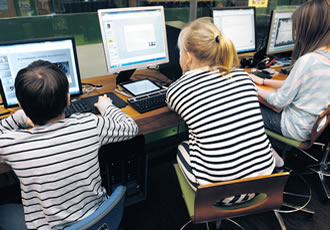 TEACHING children to write is transitioning to a computer era, as traditional cursive writing and calligraphy will not be taught at Finnish schools after the autumn 2016 and will be replaced with the study of typing skills, reported Savon Sanomat on 18 November.

"Fluent typing skills are an important national competence," explained Minna Harmanen from the National Board of Education which is currently finalising the guidelines for the new study of writing.

Harmanen acknowledged that waiving handwriting will be a major cultural transformation, but added that schools will still have room for altering their studies: when the teachers want, they can still teach longhand. Typing should be also easier to connect to teaching everyday life skills than handwriting.

Apart from the curriculum, the schools have different means for teaching children computer skills. There are schools with hundreds of tablets to teach and learn with, but also schools with only one computer class, such as Kasurila primary school in Siilinjärvi.

The principal of the school, Marja Rytivaara said that they will get their first tablets next year, but believes that the children are learning many of the new computer skills outside of school, so the changes in the studies might not have a lot of influence for example on children of unequal position.