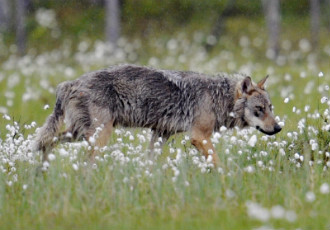 People for the Ethical Treatment of Animals (PETA) has launched a campaign to save the remaining wolves in Finland from extinction.

PETA on Tuesday published a so-called action alert according to which the wolf population in Lapland is at the brink of extinction due to poaching and licensed hunting. The animal rights organisation urges its supporters to take action by writing to Petteri Orpo (NCP), the Minister of Agriculture and Forestry, and Jaakko Lehtonen, the director of the Finnish Tourist Board.

Instead of endorsing such an assault on its wildlife, Finland should encourage responsible ecotourism in regions inhabited by wolves, PETA proposes.

The Finnish Wildlife Agency is currently drafting a new management plan for the wolf population in Finland, which is to be presented to decision-makers for evaluation in January. “Hunting is naturally an option considered in the management plan. It's necessary to relax permit procedures in cases of trouble-making wolves,” says Sami Niemi, a ministerial adviser at the Ministry of Agriculture and Forestry.

The public debate over wolf policy in Finland heated up last week after Orpo revealed in an interview with Lännen Media that he is prepared to allow hunting as means to manage the wolf population. Orpo justified his standpoint by stating that people are increasingly concerned about wolves wandering into residential areas and that the wolf population has grown.

The Finnish Game and Fisheries Research Institute, however, says that the population has in fact halved to 140—155 in less than ten years.

Orpo refused to comment on the matter to Helsingin Sanomat.