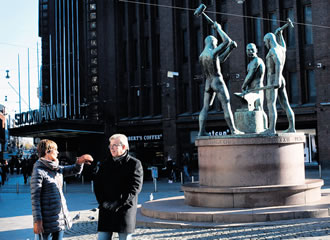 Over the past few centuries, the city centre has moved away from Kauppatori.

A steady flow of people crosses Three Smiths Square where the statue depicting the three strongly built smiths stands at the corner of Aleksanterinkatu and Mannerheimintie.

According to over 8,000 readers of Helsingin Sanomat, who participated in a survey, the statue marks the centre of Helsinki.

A handful of girls walk briskly past the statue laden with shopping bags, ponytails swinging. Pigeons also like to gather at the square.

A couple walks to the statue and stops, gazing towards Kamppi. Elisabet and Erik Hagström, from Kokkola, are in Helsinki to meet their son Calle Hagström, who studies in the city. When he strides to the spot, the trio hug and exchange greetings before heading to a café to warm up.

Do the visitors have an opinion on the location of Helsinki's centre?

"It's around here," Erik Hagström estimates. They think the centre covers an area on both sides of Aleksanterinkatu but do not include Kamppi in the most central part of Helsinki. "A city centre is a place that everyone knows," Erik Hagström comments.

The Three Smiths Statue is within a spitting distance of the front doors of department store Stockmann where a number of people stand under the store's clock, a well-known meeting place, shivering in the cold weather.

Sanna Andelin, from Helsinki, is waiting for her friend Kristiina Viikari who is running late, par for the course for her. From the department store, the two friends are planning to head towards Punavuori for late breakfast.

"This is an iconic landmark," says Andelin, adding that to her this spot has been the centre of Helsinki since childhood.

"Some people claim that the centre has shifted to Kamppi but for me it's still here."

Andelin speculates that the view on the correct location of the centre may be a question of generation.

"Teenagers used to hang out at the station, now they go to Kamppi. For them, that's the centre."

In 1870, when the Old Student House was built on the edge of Three Smiths Square, it was outside the city centre, which back then meant the area surrounding the Market Square and Esplanade, explains Laura Kolbe, the professor of European History at the University of Helsinki.

Töölönlahti, which was then known as Kluuvinlahti, and its muddy banks, reached the street corner where Academic Bookstore stands.

The centre shifted to its current location only at the end of the 19th century, spurred by new shops opening on Aleksanterinkatu and, later on in the 20th century, the construction of the Stockmann department store. "The current city centre is a bourgeois centre, focused on trade," says Kolbe.

An increase in the number of shops is pushing the centre towards Kamppi, says Heikki A. Loikkanen, emeritus professor of urban economics at the University of Helsinki.

But growth in the number of retail businesses does not turn a location into a city centre if there are no people living in the area, which is why building housing is one of the main means of livening up the centre.

"If all new houses are built around the edges of the city, the centre will remain an area with an abundance of dead spots," says Loikkanen.

"The reason why New York's Manhattan is such an exciting area is that it offers an amazing range of activities and services. And that's because there are plenty of people living in the area, creating demand for the services."

Loikkanen says that decision-makers in Helsinki should consider whether the population density in the city could be increased by building taller houses.

"Helsinki has to decide whether it wants to be a small metropolis, with a bustling centre, or a large city with a centre that spreads out but is not very lively."