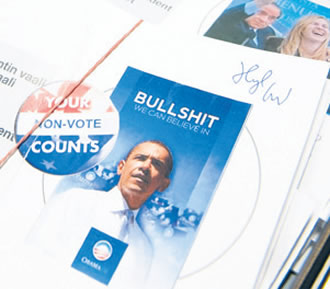 ELECTORAL officials in different constituencies differ as to how strict they should be about what voters write on the ballot. In the first round of this year’s presidential election, for instance, a ballot in Pirkanmaa that had a smiley face as well as a candidate’s number was allowed, whereas a similar infringement in Uusimaa was discounted. The case was reported last week by Aamulehti.

By law there should be no additional markings at all on the ballot except one candidate’s number. But in practice, constituency officials have the final say.

0.3. per cent of all votes cast in the Uusimaa constituency in the first round of the presidential election were discounted. “The most common sorts of inappropriate markings were smiley faces and hearts along with the candidate’s number, and votes for Donald Duck, [long-deceased former President Urho Kaleva] Kekkonen, and [departing President Tarja] Halonen,” says Jukka Jaakkola, the secretary of Uusimaa constituency.

Jaakkola’s colleague, second secretary Tuomas Nurmi points out however that Uusimaa officials have not been completely draconian when it comes to some additional markings on ballots. Ballots on which the candidate’s name have been written along with the number were allowed, at least when the two matched: “Contradictory markings and votes with statements of any kind written on them were discounted.”

The message is clear: the best way to make sure your vote gets counted is to stick strictly to the point, and keep anything beyond a single number for other occasions.