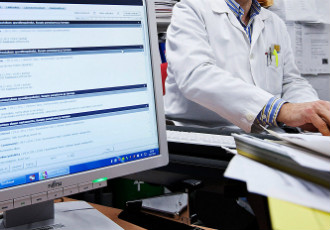 It is 2017. A young man has broken his leg in a bicycle accident in Helsinki. A doctor on duty at the Töölö Emergency Clinic opens the patient data system Apotti and enters the personal identity code of the man.

The patient health record of the man pops up on the screen. The doctor enters new information, such as details about the surgery that is about to begin.

The information automatically becomes accessible also to other Apotti users, be it a health care centre, social services office or emergency clinic.

This is how the new patient data system is set to work, if all goes according to plan. Daydreaming, slam critics of the project. A leap in the right direction, insist others.

For a patient data system, Apotti has stirred up an unusual degree of controversy – largely due to the costs of the project. At present, the data system is estimated to cost tax-payers 335–430 million euros.

Investing so lavishly in a new patient data system is absurd, views a doctor employed at the Hospital District of Helsinki and Uusimaa (HUS). “I like to think about a scenario after the completion of the new children's hospital. A doctor sits by his desk and opens a software that has cost many times more than the hospital,” the doctor portrays, speaking on the condition of anonymity.

The new children's hospital under construction in Meilahti, Helsinki, is expected to cost 160 million euros.

Today, the roughly 21,000 health care professionals employed at HUS enter information about the 500,000 patients they treat every year into Uranus, a data system developed by Canada's CGI.

It has been estimated that the maintenance of the current system costs as much as 45 million euros a year. Apotti, in turn, is projected to generate savings and improvements in productivity worth its price tag in seven years.

Pertti Mäkelä, the chief information officer at HUS, estimates that over 260 data systems are currently in use within the hospital district, including applications for medical specialists and financial administrators.

Most of the applications will become obsolete after the adoption of Apotti, project manager Hannu Välimäki believes. If all goes according to plan, doctors and nurses will only have to use one system instead of the current three, four or even eight.

In addition to HUS, the social services departments and health care centres of the region are set to adopt Apotti.

Yet, the City Council of Espoo voted against the adoption of the data system in January 2013, deeming its costs and risks excessive and criticising the fact that health care providers will be stuck with one system supplier.