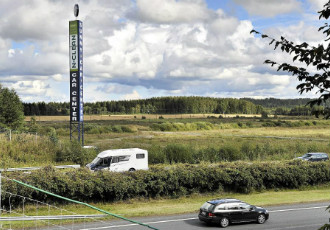 The controversy surrounding the project to construct a massive car business centre in Hämeenlinna, Sunny Car Center, has resulted in a criminal investigation.

The investigation is related to allegations that local Finns Party policy-makers have leaked classified information about the construction project to a news outlet in Zambia. “It does meet the threshold for a pre-trial investigation,” confirms detective chief inspector Jari Uotila, the officer in charge of the investigation at the Hämeenlinna Police Department.

“There may be a reason to suspect defamation. We have to determine whether this is a case of regular or aggravated form of the offence,” he adds.

The pre-trial investigation is only in its embryonic stages and has yet to be assigned an investigator.

The criminal complaint was filed earlier this week by the policy-makers in question: Lulu Ranne, a member on the Hämeenlinna City Board, and councilman Ismo Soukola, a Member of the Parliament. The people implicated in the complaint are Markku Ritaluoma, the managing director at Sunny Car Center, and Iisakki Kiemunki (SDP), the chairman of the Hämeenlinna City Council.

The complaint is only the most recent development in the controversy surrounding the construction project. Ritaluoma is currently expecting a multi-million euro investment from the widow of a former President of Zambia for his ambitious project. Many have branded the funding arrangement as a large-scale scam that will only result in Ritaluoma losing the 330,000 euros he coughed up to release the funds of the investor.

Ranne and Soukola argue in the complaint that Ritaluoma has accused them of malfeasance and secrecy offence by presenting a dubious letter drawn up by a Zambian investigator to the City Council. Written in bad English, the letter appears to claim that Ranne and Soukola were responsible for feeding information to an African online newspaper.

Kiemunki, in turn, has repeated the unfounded allegations in public without ascertaining their credibility, according to Ranne and Soukola.

While Ritaluoma could not be reached for a comment on Friday, Kiemunki revealed that he has his own theory about the source of the suspected leak. “There are clear indications that the information came from the Hämeenlinna City Council.”

“My evidence points to someone else than Ranne and Soukola,” he said, adding that he will discuss his theory with the police.