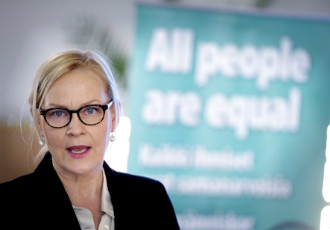 Finland remains incapable of intervening in human trafficking related to sexual exploitation, states Eva Biaudet, the Ombudsman for Minorities. “If any other minority group was in such a weak position, it would surely receive more attention,” she views.

A report published on Wednesday alleges that in Finland several cases with characteristics of human trafficking have been prosecuted as pandering. As a result, the victims of sex trade are treated as witnesses and denied the right to a legal counsel, a support person and damages. In addition, they have not been admitted to the system of assistance for victims of human trafficking.

The authors of the report speculate on whether the phenomenon may be belittled because the victims are often women of foreign backgrounds.

The underlying causes, Biaudet says, include the prevalent attitudinal climate and the failure of the police and other authorities to fully understand the nature and extent of human trafficking. “If the resources of authorities are directed to keeping tabs on illegal immigration, it's not difficult to understand why human trafficking goes undetected.”

The authors of the report also claim that courts in their verdicts refer to sexual exploitation in a manner that belittles the phenomenon. Similarly, excessive emphasis is placed on whether or not the victims have initially consented to prostitution, even if they resigned to it.

“Somehow, we tend to think that if people have taken up prostitution they must tolerate all the consequences, such as violence and abuse,” Biaudet highlights.

The authors also call attention to the fact that in Finland human trafficking is mistakenly regarded as a phenomenon associated with foreigners, while in fact the majority of both offenders and victims are Finns.

Biaudet on Wednesday also expressed her support for the criminalisation of the purchase of sex. “Human trafficking is an international phenomenon, but it also occurs on a national level. That is why it must also be addressed in Finland.”