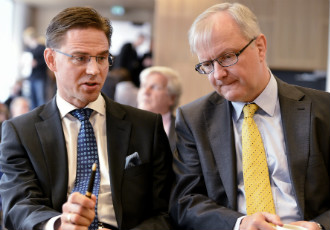 Finland is no longer able to keep step with the budgetary rules introduced by the European Union, with revised projections suggesting that the country will fall short of the yearly objective for structural deficit both in 2014 and 2015.

No more than a few months ago, the country appeared to be on the right path with respect to its structural deficit. However, the circumstances have changed dramatically over the summer months.

The Ministry of Finance is to release its revised projection in full in mid-September.

The concept of structural deficit does not take economic fluctuations into consideration and hence measures the underlying, structural problems of an economy.

Finland would have to adjust its budget by well over one billion euros if it wanted not to pierce the threshold of 0.5 per cent of GDP imposed by the European Union.

The estimates drafted by the Ministry of Finance indicate that Finland will deviate from the objective or the path toward it in both 2014 and 2015. The European Commission, however, uses its own estimates, which will not be available until early November.

Government officials and policy-makers have already expressed their concerns over the performance of Finland with respect to the budgetary rules. Olli Rehn (Centre), the previous European Commissioner for Economic and Monetary Affairs, warned early this year that the structural deficit of Finland will widen further.

Fundamentally, the regression can be attributed to two factors: the adoption of new statistical methodology and a weaker-than-expected economic growth rate, which is also threatening to de-stabilise the public economy.

The adoption of new methodology only accounts for some 0.2—0.4 percentage points of the change in projections.

Regardless, Finland remains unlikely to face any punitive measures. In the short term, the European Commission can at worst issue a reprimand or recommendation for a course of action.