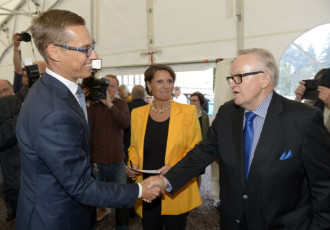 The construction of a new children's hospital began in Meilahti, Helsinki, on Tuesday amid a jubilant atmosphere, after the fund-raising campaign reached – and exceeded – its donation target of 30 million euros only hours before the symbolic ground-breaking ceremony.

The donation to push the fund-raising campaign over the finish line was received from Naisopettajat ry, an association of female teachers that decided on Tuesday to dissolve and donate the 300,000 euros it had accumulated from membership fees over its roughly 100-year history.

“Thanks go to the entire Finland. This project is a reminder that we form the society together and that there are other ways to influence than voting and paying taxes,” said Anne Berner, the chairperson of New Children's Hospital 2017.

In addition to Berner, Prime Minister Alexander Stubb (NCP), bishop Eero Huovinen and President Martti Ahtisaari spoke at the event, all emphasising that the objective is to build the best children's hospital in the world both from the viewpoint of children and families.

The children's hospital is scheduled for completion in 2017, in time to commemorate the centenary of Finnish independence.

Overall, the construction project is estimated to cost roughly 160 million euros. The Government and the Hospital District of Helsinki and Uusimaa have both pledged to contribute 40 million euros, while the remaining costs will be covered by the donations and a roughly 50-million euro loan.

“It was an extremely positive surprise that Finns participated so widely,” commented Tuula Colliander, the fund-raising manager at New Children's Hospital 2017.