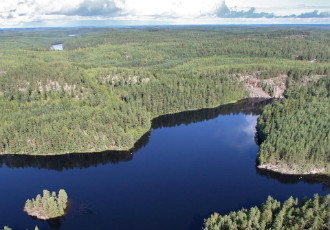 Humanity exhausted the global biocapacity for the year yesterday, on 19 August, and will henceforth operate on a deficit.

Finland is one of a handful of countries with a biocapacity larger than its ecological footprint, according to the Global Footprint Network, the non-profit organisation responsible for drawing up the estimate.

The country fares well first and foremost due to its massive biocapacity – or simply put, its abundance of forests and small population. “Finland's consumption is smaller than production per capita,” confirms Sauli Rouhinen, an environment counsellor at the Ministry of the Environment.

However, Finland only comes out smelling like roses if a particular methodology is used.

“It's somewhat misleading and wrong to examine consumption per country. If every country consumed like Finland, humanity would need three planet Earths,” highlights Jari Luukkonen, the conservation director at WWF Finland.

Statistics indicate that in 2012 the carbon footprint of a Finn was the 11th largest in the world, ranking only behind the average resident of the United States and certain countries in the Arabian Peninsula, he points out.  The large carbon footprint, he estimates, is attributable to high energy consumption and the use of coal in energy production.

On the other hand, researchers at the Global Footprint Network admit that it is impossible to determine the Earth Overshoot Day – the date when humanity has exhausted the nature's resources for the year – precisely.

In addition, the estimate requires that certain debatable presumptions are made. It is, for example, difficult to determine which country is responsible for the environmental effects of export activities – the producer or the destination.

“The figures are based on UN statistics, but in some countries the statistics are updated every five years,” Rouhinen says.

“On a global level, however, it can be calculated that the nature is unable to absorb all the carbon dioxide,” he reminds.

The Earth Overshoot Day has been gradually moved backward at a pace of a few days per year. Despite the fact that determining the date is more or less a guess, moving the day backward is justified by the increase in the world's population and, subsequently, the consumption of natural resources.

Regardless of the methodology used, the ecological footprint has continued to grow across the globe. “We'll rue carbon dioxide for decades to come, even if we stopped using it immediately. We would still be in dire straits,” says Rouhinen.