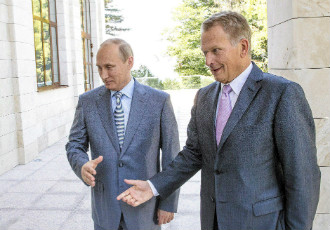 The crisis in Ukraine was at risk of escalating further on Friday, after Ukraine announced that it has destroyed the majority of a column of Russian military vehicles that crossed the border into Ukraine. Russia has rejected the claims.

Niinistö on Friday urged Russia to do its utmost to stem the flow of weapons across the border into Ukraine. “Russia has to make sure that no weapons cross the border,” he underscored in a press conference.

Putin, on the other hand, continued to refer to the crisis as a Ukrainian domestic crisis. “We will do all we can to stop the armed confrontation. We endorse dialogue and will help resolve the humanitarian catastrophe,” he nevertheless assured.

Niinistö highlighted that a promising sign of a looming resolution to the crisis was witnessed on Friday when Russia, Ukraine and the Red Cross reached an agreement on the inspections of Russian aid deliveries. “Hopefully, this is an indication of the possibility of building mutual trust because that is needed to take the next step, which should be a truce,” he stated.

The Finnish President acted as an emissary for the European Union on Friday and announced after his meeting with Putin that he will travel to Kiev, Ukraine, on Saturday to sit down with his Ukrainian counterpart Petro Poroshenko.