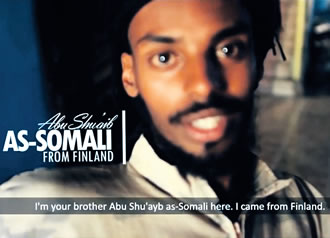 In early August, the young man, known by his nom de guerre Abu Shuayb as-Somali, appeared in a propaganda video uploaded to YouTube, urging Finns to join him in "the caliphate" of the Islamic State of Iraq and Syria (ISIS).

The caliphate refers to the territories ISIS controls in Iraq and Syria.

The identity of the man born in 1991 was revealed on 5 August when Finnish-Somali politician Faisal Ali Warabe confirmed in an interview with YLE that the man on the video is his son. "When I saw the video, I was disappointed with myself as a father. I was often absent from the life of my son. I've been overseas all the time, and my son hasn't had a father figure," he rued.

A cousin of Sayid Hussein Feisal Ali has similarly left Leppävaara for Syria and appeared in a propaganda video under his nom de guerre Abu Mansuur Somali. Information obtained by Helsingin Sanomat confirms that he died earlier this summer, as reported by the daily in June.

It appears that the cousins became radicalised together or at least knew each other very well.

"There's no doubt about it. They associated with each other. They have the same ideology," says Abdullahi Farah, a leader in the Finnish Somali community. "I used to see both men in my shop less than a few years ago," the Espoo-based shopkeeper adds.

According to Farah, the young men withdrew from the Somali community after they became radicalised.

Sayid Hussein Feisal Ali travelled to Syria with his wife, who is also a Finn of Somali descent, only a couple of weeks after they had returned from a trip to Somalia, where they – according to Farah – made contact with al-Shabaab, a local militant Islamic faction.

The wife, Farah believes, was brainwashed by her husband.

Sayid Hussein Feisal Ali became radicalised at the turn of the last decade. In July 2010, he was interviewed by Helsingin Sanomat for a story about the presidential campaign of his father in Somalia.

The daily wrote about an 18-year-old Finnish-born vocational school student from Espoo who flew to Hargeisa, Somaliland, to cast a vote for his father.

"People here like elections a lot more than in Finland," the young man told. "There was a long line at the polling station, but it was worth it."

The statement is in sharp contrast to the current circumstances; ISIS' so-called caliphate is as far from democracy as it gets.

The Somali community in Finland has expressed its grave concern over the radicalisation of young people. "The matter must be taken seriously," underlines Arshe Said, the chairman of the Somali League in Finland.

The fact that the cousins who left Finland to fight in Syria were both from Leppävaara is likely to be but a coincidence. "There's nothing unusual in Leppävaara," Said estimates. "Maybe they influenced each other because they were the same age."

Jyri Rantala, the communications director at the Finnish Security Intelligence Service (Supo), similarly underlines that Leppävaara is not under any special scrutiny. "I by no means want to point the finger at Leppävaara."