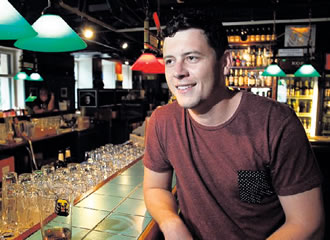 Foreign men are in high demand particularly in the capital region and other university cities as young women struggle to find viable partner candidates among Finnish men, says Minna Säävälä, a senior researcher at the Family Federation of Finland.

"The problem is that [young] women are beginning to be more educated than men and struggle to find men of similar educational background. Such foreigners do exist," she explains.

The phenomenon is manifested in marriage statistics: Finnish women in their 20s and 30s not only marry foreign men much earlier than Finnish men marry foreign women, they also do so in growing numbers.

Although no statistics on dating or pairing up are available, many foreign men have encountered the phenomenon first hand.

Todd, a 25-year-old engineer from Australia, describes his recent nine-week business trip to Finland as unforgettable. "I've tried to explain to my mates in Australia how easy it was to find company in Finland. They don't understand how easy it is. You must experience it first hand."

Finnish women, he estimates, must simply love the Australian accent as they were not afraid to make the initiative.

"I took at least one woman back to my place every week."

Luchino Sivori noticed the same during his recent one-year stay in Finland, although he did not respond to the flirting because his girlfriend was waiting for him in Spain. The 31-year-old Spaniard estimates that the interest may stem from the fact that Finnish men are not as willing to talk about feelings, sex and love.

"Women are perhaps drawn by the self-confidence of foreign men and partly by the stereotype of a hot Latin lover."

Indeed, stereotypes may to a degree explain the popularity of foreign men, confirms Johanna Leinonen, a research coordinator at the University of Turku. "Many Finns admire the American culture and associate the French with a number of positive images stemming from films and literature," she points out.

Säävälä, in turn, estimates that the phenomenon may spread among friends similarly to any other social phenomenon.

She also points out that women living in cities accept immigrants more readily than other population groups, according to studies. "The older generations may be more sceptical about the prospects of a multi-cultural marriage. Studies indicate that the risk of divorce is higher for multi-cultural couples. Young people don't necessarily consider that a crucial factor when pairing up."

"Foreign men are much better-looking"

Saara, 32, from Jyväskylä has had roughly a dozen short-term relationships with foreign men. In her experience, foreign men are easier to talk to, better-mannered and considerate by nature. "They don't simply stare from a corner without saying a word but come up to talk to you," she highlights.

"Naturally, I'm not claiming that all Finnish men are tongue-tied."

Lotta, a 29-year-old woman from Helsinki who has had an Italian partner and is currently dating a Frenchman, is similarly more prone to fall for a foreign man. "With Southern European men, it's easier to talk about anything during daytime. They can also make the initiative when they're sober."

"In addition, there aren't too many interesting single Finnish men in Helsinki," she argues.

Both Lotta and Saara are looking for a long-term relationship.

"I would rather want a man for a long-term relationship than for a fling. In the end, what is crucial is his character, not his country of origin – although foreign men are often so much better-looking," concedes Saara.

Regardless, neither are willing to move abroad with their partners, at least not without a job.

"Studies show that Finnish women are not interested in moving abroad, not even for love. They would rather live here with a foreign partner," says Säävälä.

The names of Saara and Lotta have been changed.