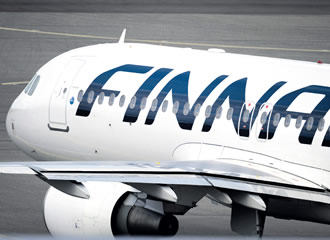 The suspension of flights over Siberia would be a crippling blow to Finnair, with the strategy of the ailing Finnish airline resting on the provision of short and fast connections between Europe and Asia.

Russian news outlets Interfax and Vedomosti reported on Tuesday that Moscow is mulling over restricting or prohibiting Finnair and other European airlines from flying over Siberia en route to Asia in response to the economic sanctions imposed against Russian businesses by the European Union.

Spokespersons at Finnair declined to comment on the reports.

Dmitry Medvedev, the Prime Minister of Russia, sat down with the Russian Minister of Transport and the deputy CEO of Aeroflot on Tuesday.

"We should discuss possible retaliation," he said according to Reuters.

Dobrolet, a low-cost subsidiary of Aeroflot, had to ground its entire fleet last week after it was denied access to maintenance services under sanctions introduced by the European Union against businesses allegedly involved in the escalation of the crisis in Crimea.

Kai Mykkänen, the director of Russian affairs at the Confederation of Finnish Industries (EK), believes restricting Siberian overflights would not be a particularly rational response for Russia. "It would lower the bar for Europe to impose new sanctions on Russia," he pointed out.

"On the other hand, the pressure is building up in Russia."

Finnair operates flights to 15 destinations in Asia and has set itself the objective of doubling the net sales of its Asian operations between 2010 and 2020. If Moscow decides to prohibit flights over Siberia, the airline would lose its key competitive asset, views Jorma Mäntynen, a professor at the Department of Information Management and Logistics of the Tampere University of Technology.

"I believe that would hurt Finnair badly," he estimated.

Similarly, the significance of the Helsinki Airport as a hub for air traffic between Europe and Asia would diminish.

In addition, Finnair alongside other European airlines flying over Siberia would have to revise their flight routes. "In the 1980s, you flew over the North Pole to Japan [...]. I'm not sure whether that remains a viable alternative today," said Mäntynen.

The increase in distance would translate to longer flight times and higher ticket prices.

Anna Sotaniemi, a ministerial counsellor at the Ministry of Transport and Communications, reminded that although Russia can theoretically close off its airspace to European carriers, Moscow has yet to issue an official notification of such action.

"Russia controls its own airspace. There are no international regulations in place that would prohibit Russia from doing so," she told Helsingin Sanomat.