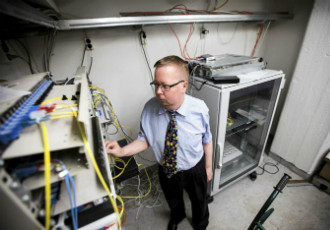 Ville Oksanen, a vice chairman at Electronic Frontier Finland (Effi), has expressed his doubts over the ability of Russia to crack the Tor network.

On Saturday, Helsingin Sanomat wrote that the Russian Ministry of Internal Affairs is offering nearly four million roubles, or roughly 85,000 euros, to anyone for a way to decrypt data transmitted over the anonymous browsing network.

“If you take into consideration how much resources the NSA has used on its attempts to crack the network, it's very unlikely that anyone could find ground-breaking data security vulnerabilities in Tor for such a sum,” Oksanen says.

“In theory, it's possible that someone already has an answer in their desk drawer, but I doubt anyone is prepared to give it up for such a small amount of money.”

Instead, Oksanen views, the call to crack Tor is likely to enhance the data security of the network. “The request will benefit the Tor network by calling more attention to its problems and thereby also to resolving them.”

At present, the global network consists of roughly 8,000 relay servers. Communications inside the network are encrypted and transmitted through three randomly-selected relays in order to conceal the identity of the sender.

According to Oksanen, only an agency such as the National Security Agency (NSA) has the resources to crack the network. “In effect, you would have to store all global Internet traffic. It could be possible to track individual Tor users under certain circumstances, but the NSA has admitted in its own documents that it can't track everyone.”

With the number of active Tor users increasing, the task will only become more difficult, reminds Oksanen. As a defender of digital rights, Effi is set to campaign for the establishment of additional servers also in Finland.

In Russia, the popularity of the anonymity network has increased considerably following the recent efforts to step up online censorship. The Moscow Times estimates that in July alone the number of Tor users has surged from 80,000 to 200,000.

“It's understandable that parties that aren't fond of the right of people to protect their privacy seek to attack systems such as Tor,” Oksanen comments.

The reward offered by Russia, he views, is an indication of the role of the anonymity network in promoting democracy. “The purpose of Tor is to secure communications.”