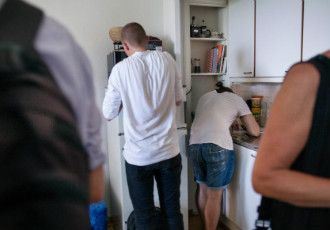 Moona Kinnunen is waving a fan to cool herself down. It is 28 degrees Celsius outside on Fleminginkatu in Helsinki; inside the 26 square metre studio flat, the temperature is 10 degrees higher.

Roughly two dozen prospective tenants have crammed into the flat, and as soon as some leave others enter. Already a resident of Helsinki, Kinnunen is here to help her friend Joni Tilli find a flat in the Finnish capital.

“The market seems to be in a frenzy. I'll start studying physics at the University of Helsinki in the autumn, so I have to find a flat,” says Tilli.

While the rest of Finland remains almost at a standstill, the rental market is teeming with prospective tenants, especially following the publication of final university admission results a few weeks ago. Yet, experts estimate that the busiest weeks lie ahead as students gradually wake up from the holiday bliss to the imminent scarcity of flats.

With thousands in need of a rental flat, bringing together tenants and lessors in the Helsinki region is a difficult task. In fact, only a fraction of vacant studio flats are listed as available for rent online or put up for viewing like the one on Fleminginkatu. Instead, most small flats are rented out directly by realtors, which only invite a few applicants to their viewings.

“A viewing with over one hundred applicants serves the interests of no one. At worst, the neighbours have rang the police,” explains Timo Metsola, the managing director at Vuokraturva.

At present, the real estate agency has nearly 10,000 people looking for studio flats in its registry. In addition to Vuokraturva, VVO, Sato, Ovenia and Realia are among the major agencies that allow people to apply for flats through their online service.

“An applicant who is willing to consider more than a single flat from a certain neighbourhood is in the best position,” says Asta Immonen, a sales director at Sato.

“First come, first served,” she reminds. “Surprisingly many don't start looking until late August. They're between a rock and hard place and have to accept a flat that may not be the best possible. The supply is greater for the present.”