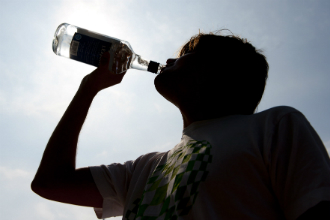 The facts emerged from the health statistics published in June by NOMESKO, the Nordic Medico-Statistical Committee. The shorter life expectancy for Finnish men is attributed to the highest rates of cardiovascular disease, suicide, accident and alcohol related deaths in the Nordic countries.

"The poor ranking is caused by men's lifestyle. Finnish men have traditionally been more stubborn in declining medical care and less persuaded than other Nordic men when it comes to health recommendations," says research professor Mika Gissler from National Institute for Health and Welfare.

"In Finland, both types of diabetes commonly occur, and they are directly related to a higher risk of developing a cardiovascular disease. Type 1 diabetes stems from the Finns' genes, whereas risk factors for type 2 diabetes are from doing little exercise and being obese," says Gissler.

According to Gissler, the high ranking of Finnish men for accidental and suicide deaths is mainly due to excessive alcohol consumption and binge drinking.

"Suicides among men in relative to the amount of gun licenses. The more there are guns available at home, the more likely it is for men to commit suicide."

"Compared to the rest of Europe, Finland's suicide rates are no longer high. Finland is not in the top 10 of European countries with the highest suicide numbers. Psychotic drugs are better nowadays and mental illness itself is more accepted than in the '90s. These factors have brought down the number of suicides committed," Gissler says.

Although Finland was ranked last in the statistics for male life expectancy, the number of people dying of cancer and drugs was lower than that of other Nordic countries. After Sweden, Finnish men had the fewest cancer diagnoses. The reported amount of testicular cancer cases was the lowest and that of pancreatic cancer the second lowest in Finland.

"When life expectancy is shorter, there is not so much time for cancers to develop," Gissler says.

Lower ranking in drug related deaths is, according to Gissler, a result of Finland not having access to large quantities of drugs as, for example, Denmark or Norway.

"Women are more active than men in attending regular health checks. Among Finnish men, the prevailing attitude is still that the doctor is called only when they are at their death beds," Gissler says.

However, he believes it's simplifying to say that women take better care of their health than men.

"Health awareness and taking care of one's own wellbeing has increased remarkably among men in recent years."