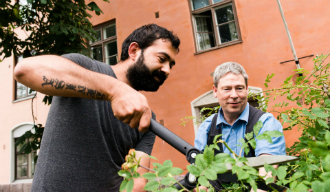 Reliable, hard-working and strong as a bear. That is what the Roma hired by Olli Toivonen have been like.

When Toivonen is given a chance to praise his employees his smile becomes even wider than usual.

“I trust them and they trust me.”

“Olli is a good man and the best boss ever.”

Toivonen hired Ciurariu three years ago to do mainly outdoor work for his property maintenance company. Both residents and real estate management companies have given positive feedback.

While Toivonen speculates that childhood spent at farms in Eastern Europe may have molded the Roma into such hard workers, Ciurariu believes it may be because the Roma have a burning desire to work.

Originally from Transylvania in Romania, Ciurariu says that he arrived in Finland already six years ago by bus and ferry. It was winter. To start with, Ciurariu slept in the snow, unable to find work.

Then Pirjo Hongisto, who had accommodated several other Roma people in the past, gave him a roof above his head. And that is where Ciurariu stayed for the next 18 months while Hongisto helped him find a job and a place to stay.

Now Ciurariu has a permanent job and he lives in Puotila with his wife and two children. He says their children are homesick for Romania because they miss farmyard horses and other animals.

Having a job makes Ciurariu an exception among the Romanian and Bulgarian Roma in Finland. Many of his Roma friends are envious of his good luck, asking Ciurariu to help them find work. Ciurariu wishes he could do more to help them but there are not many jobs available to the Roma.

“We’re strong and want to work,” Ciurariu says about the Roma of his acquaintance.

Mere desire to work is not enough to open the doors for an applicant without qualifications or language skills. Ciurariu could at least speak some English.

According to him, outdoor, forest and cleaning work would make for suitable jobs for the Roma arriving in Finland. To start with, the Roma would require plenty of guidance from a supervisor at the work site. Ciurariu hopes that the Roma could be given a chance to show their abilities in practice before making a decision on whether to hire them.

Toivonen hires Roma employees particularly in winter when extra pairs of hands are required to take care of the snow clearing. In the past, he has tried to hire unemployed Finns but has not succeeded.

“One fellow said that he’d like to take the job but couldn’t afford to do so. I couldn’t understand what he meant,” says Toivonen. Later on, he realised the man would have been out of pocket, losing his earnings-related unemployment benefit if he accepted the work.

Toivosen says that the best way to help people is to provide them with a way of taking care of themselves.

“That way, everyone wins.”

Ciurariu says that while all people are different, a vast majority of the Roma come to Finland to look for work.

“In Finland, people think that all Roma are the same. If one is caught stealing, all are labelled as thieves.”

This is a topic that Toivonen has strong feelings about.

“I have found hard-working and reliable workers among the Roma, as well as among Finns. You shouldn’t make generalisations – not for men or women, young or old or the Roma or Finns.”