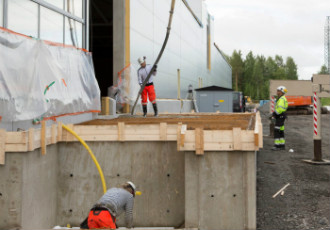 Concrete casts extend across the construction site of a shopping centre by national road 4 in the district of Ritaharju, Oulu.

“The schedule is tight, but the second Ideapark in Finland will be completed in six months' time, by the end of October,” assures Antti Konttila, a foreman at Rakennusliike Lehto.

Ideapark Oulu will upon its completion become the longest shopping centre in Finland, with its length of over 400 metres. The arched, narrow single-storey building will be roughly 60 metres wide and is projected to cost a total of 30 million euros.

Roughly half of the shopping centre will be established in the adjacent facilities abandoned by the furniture retailer Masku.

“Navigating in a tubular building is easy because all the shops are located along a single, long corridor,” says Petri Häli, the shopping centre manager at Ideapark Oulu.

Häli is confident in the appeal of new shopping centre and points out that roughly 50,000 people live within five kilometres of it. “There's nothing but a Sale and K-market in the Ritaharju area. The population is forecast to increase to 80,000 by the year 2020,” he highlights.

In addition to a handful of restaurants and cafés, Ideapark Oulu will feature a grocery shop operated by the discount retailer Tokmanni.

“Oulu will become a repeat of Ideapark Tampere, only notably smaller,” says Häli.

The shopping centre is expected to attract roughly three million visitors per year with its mix of 55 tenants, including Toys R Us, the largest chain of toy stores in the world.