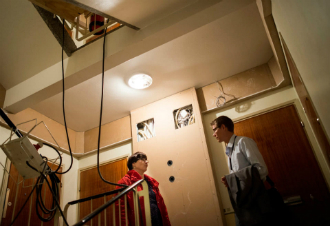 Eeva Aaltonen, who acts as the chair of her housing company’s board, is pleased to see how the renovation project is progressing in her block of flats built in 1958 on Poutamäentie in Helsinki’s Pajamäki, with the plumbing work costing more than a million euros nearing its completion. Aaltonen, who has been staying with his mother-in-law, hopes to able to move back in August.

The new tax reporting requirement in the construction industry, which came into effect on Tuesday, caused some additional confusion during the project.

“We had some contradictory information on whether the new regulation concerned housing companies. I relied on our real estate manager and the contractor to know how to proceed with the matter,” says Aaltonen.

The Tax Administration has also noticed that despite the efforts to provide information on the new regulation, the general public has been caught unawares by the reform.

Besides construction companies, the new reporting requirement concerns all customers ordering construction or renovation work, including other companies in the industry, housing companies and municipalities.

In Aaltonen’s housing company, SKH-Isännöinti is responsible for property management.

“Nearly ten different parties had to submit reports to the Tax Administration in connection with this project,” explains Juha Kulomäki, the deputy managing director at SKH-Isännöinti.

One of the parties with a reporting duty is the housing company, which in this case gave the task to the property management company to take care of. In addition to the housing company, numerous subcontractors, ranging from companies removing asbestos to electric engineering firms, are obliged to submit reports to the Tax Administration.

Under the new regulation, reports on work ordered, the costs and who carried out the work must be submitted to tax authorities monthly.

Kulomäki has also come to realise that operators in the industry do not have adequate information on the reform.

The reporting requirement concerns any work that costs more than 15,000 euros.

“That limit is easily exceeded even in a run-of-the-mill renovation project. All you need is water damage in a flat, and it costs more than that to fix it,” says Kulomäki.

There are around 80,000 housing companies in Finland, with many of them undertaking a project that comes under the new reporting requirement every year.

According to the Finnish Real Estate Management Federation, the industry has invested to the tune of millions of euros in preparation for the reform, organising training for staff and updating software.

“This has led to heavy investments in information systems and we need to learn to operate in a new way,” explains Kulomäki.

He stresses that those small housing companies that take care of the property management without outside help must be careful.

The plumbing project on Poutamäentie is set to be completed in November. Kulomäki assures that the new regulation will not increase the costs of the work to the housing company.

“The management agreement for this year has already been signed, so we are not charging anything extra for this. We are trying to meet the new requirements with as little extra costs as possible,” he says.

“There will be some pressure on the prices to go up,” Aaltonen from the housing company board assumes.

She says she is pleased that authorities are combating the black economy.

“A system like this will provide housing companies and resident with a sense of security. You can now be sure that a man with a bucket will not turn up to do the work,” says Aaltonen.