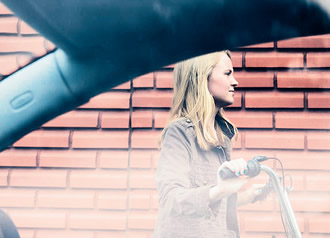 Ten years from now, transportation in Helsinki may operate very differently from the current system.

The service will be run by transportation operators, through which the regular citizen can buy all they want with a click. This does not only entail public transportation within the city, but also carpool, taxi, a train ticket to Tampere or parking fees in the city centre.

Few want to own their own car in future, when everything can be shared. If one wishes to travel from Puotila to Pukinmäki, the "route planner" of 2025 will provide information on where to change the city bike for a car due to impending rain, in addition to information on the fastest connection.

The City of Helsinki believes in the model so strongly that it plans to test it at the turn of the year with a few major employers in Vallila. Employers are being persuaded to join in by building a platform that enables employees to buy transportation services with their own funds.

Later, the experiment will also cover Kalasatama, or another new area.

The near future is surveyed more extensively in a fresh Master's Thesis commissioned by the city from Sonja Heikkilä.

"A car is no longer a status symbol for young people," Heikkilä states. On the other hand, they are more adamant in demanding simple, flexible and inexpensive transportation.

Heikkilä studied the telecommunications industry as an example of how services could be provided in a way that differs from the current model. Currently telecoms enable customers to use many online services directly, no account needed and the payment happens instantly."

One payment for all

Transportation operators could charge their services in several different ways, like operators. While one citizen can pay for services by the kilometre, another may buy a package that includes a monthly number of kilometres for a rental car and the city's internal transportation.

Heikkilä believes that one payment system for all would be possible if there were several operators competing for customers. In the metropolitan area this would mean that the Helsinki Region Transport (HSL) could no longer hold a monopoly on selling tickets.

Operators would buy services in wholesale from their producers. Citizens would easily vote with their feet, which is why the services should be easily accessible.

"It should be kept in mind, though, that no single transportation operator actually exists. In Finland this has mostly been contemplated on the public side," Heikkilä says.

In supporting smart transportation, i.e. a transportation system that utilises technology more effectively than the current one, the Ministry of Transport and Communications is actively looking into what this means in practice. Helsinki is also currently hosting a large international conference on smart transportation.

The current public transportation is too weak to serve all people's needs, Heikkilä evaluates. An increasing group of people use public transportation, as well as a car in the city. The commute can be done with the metro, while a car may be used to reach the summer place.

"Once the car is parked in the yard, it is often used excessively," Heikkilä states.

So would it be possible for people to be able to change their behaviour on a large scale within ten years?

"This could work, even though older people do not wish to give up their cars. Change comes gradually," Heikkilä says.

Society wants to save money and the environment, particularly in the growing Helsinki region.

"Of course it is possible that, even in this way, transportation cannot be arranged effectively enough," Heikkilä says.

To put it simply: with good luck, everyone wins when transportation services can be provided more accurately in ways that people really want to use them.

With bad luck, supply and demand will correlate even less, when simultaneously everyone wants to take a taxi home from their Christmas party.

Heikkilä believes that the problem can be solved with price elasticity, for example.