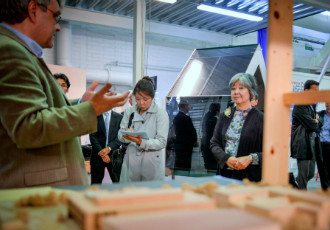 Economists and other professionals in the commercial sector face a growing threat of unemployment, as financial and insurance service providers continue shedding personnel.

Meanwhile, the professionals let go by Nokia a few years ago continue to struggle to find employment, sparking a jump of 60 per cent in the long-term unemployment of tertiary-educated people in one year.

After the mass lay-offs by Nokia, Helsinki, Espoo and Vantaa launched a joint effort to identify means to tackle the unprecedented shortage of jobs for tertiary-educated people in the capital region.

A group of Japanese officials and experts recently visited Finland to examine how the country has coped with the repercussions of the mass lay-offs. “The Japanese were able to select any EU country. They wanted especially to visit Espoo, the home of Nokia, to see how the aftercare has succeeded,” Daniel Waterschoot, an administrator at the European Commission, says.

A couple of years ago, there would have been nothing to admire. The announcement by Nokia to lay off over half of its personnel caught municipalities off guard and ill prepared. Overall, the former mobile phone giant showed the door to 5,000 staff members, including thousands in the capital region.

“We were ill prepared to face a situation where Nokia was in tatters and the change was unpredictable,” admits José Valanta, the director of business development at the City of Vantaa.

Kaato, a business community of hundreds of former Nokia employees, had already been established. Kimmo Ojuva, the general manager at Kaato, lauds Tuula Antola, the director of business development at the City of Vantaa, for recognising the significance of the community.

“A few years before it became public, certain people realised that Nokia would not make it. We founded Kaato to ensure that the expertise remains in Finland and to offer suitable work to educated people,” describes Ojuva.

The re-training opportunities and up to eight-year severance packages offered by Nokia granted more time and partly explain why the redundancies were not manifested in unemployment statistics until recently.

Antola was the first to demand that a task force on structural change be set up. In addition to the municipalities, employment authorities, the Ministry of Employment and the Economy, relevant trade organisations and representatives of companies laying off personnel have contributed to the work of the task force.

What is crucial is whether or not the task force can learn from Nokia. “We've not seen the last of the lay-offs. Either large employers will be shut down or a certain cluster will begin to crumble. We'll be ready for the next test,” Valanta assures.