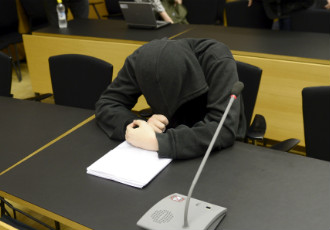 The District Court of Helsinki on Thursday sentenced a 24-year-old man and woman to prison terms for a conspiracy to carry out a killing spree at the University of Helsinki.

The male defendant was sentenced to a prison term of three years and one month for the preparation of an aggravated offence against the health and life of others, and the possession of sexually obscene pictures depicting children following the discovery of 28 videos on his computer of minors performing sex acts.

The female defendant, in turn, was sentenced to three years' imprisonment for the preparation of an aggravated offence against the health and life of others.

The defendants had devised a plan to obtain firearms by robbing a gun shop and to manufacture arsine gas to kill 50 people at the University of Helsinki. In addition, the defendants had weighed up the possibility of carrying out an attack at the Finnish Parliament or at a football match.

In interrogations, the defendants admitted to having been inspired by the Boston Marathon bombings in April last year. Neither of them are enrolled at the University of Helsinki.

The attack was initially set to be carried out in January, but the defendants called it off to refine their plans. The defendants were nabbed by the police in March, after a 17-year-old girl who had been asked to take part in the attack by the male defendant revealed the plan to her friend.

Both defendants denied the charges in court, insisting that they had no intention of carrying out the attack.