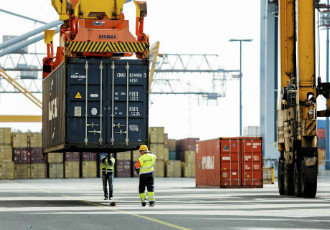 While the global economy continues its gradual recovery, the economic slowdown in Russia will drag down the Finnish economy into its third consecutive year of negative growth, economists at Danske Bank estimate.

In addition to the Russian slowdown, two factors will test the resilience of the Finnish economy this year: the shrinking size of the working-age population and the structural change in industries.

Alongside the excessively rigid monetary policy exercised by the European Central Bank and the slumping demand for investment products, the result will be a decade of lost economic growth, Danske Bank views in its economic forecast.

“The surprising turn of the Russian economy occurred at the worst possible time, just as Finland was about to break loose from the negative backwash of Nokia,” economist Juhana Brotherus says.

Despite a lacklustre start to the year, the first signs of a looming upturn have also been detected. “What is positive is that exports to the west have picked up and that an increase in order intake is paving the way for growth later this year. However, the growth will remain weak also next year,” says Brotherus.

Meanwhile, fears of unemployment and further delays in the economic recovery continue to curb household consumption in Finland. The fears, Brotherus acknowledges, are justified in light of the labour market situation, income developments and the state of the real estate market.

Abroad, the United States will drive economic growth, but emerging markets will remain vulnerable and Russia continue its slowdown. China, in contrast, is expected to be able to maintain the stability of its economy.

“Consumption and investments will become the drivers of growth. High indebtedness and the rigidity of financial markets, however, will continue to curb growth for years to come,” estimates Pasi Kuoppamäki, the chief economist at Danske Bank.

“In a world of uncertainties, low Euribor rates seem a certainty. They benefit mortgage lenders and, on the other hand, compel profit-seeking investors to move toward riskier investments,” says Kuoppamäki.