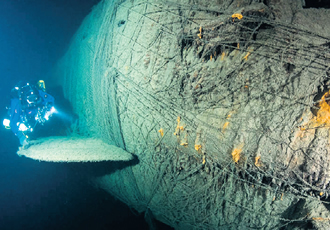 Last weekend, Badewanne, a Finnish group of voluntary divers, received confirmation that the submarine they had located was indeed the German U-26 submarine.

Jouni Polkko from Badewanne says that the wreck is located in the western Gulf of Finland.

"The submarine sank stern first, and most of its hull, including the conning tower, is visible above the mud," explains Polkko.

The U-boat lies underneath a shipping lane.

"The location is tricky, because of maritime traffic. You can only dive to the wreck after making special arrangements and in collaboration with authorities," he explains.

Polkko considers the find a significant one as U-26 was the pride of the German Navy at the beginning of World War I. During one year, the submarine sank four Russian battle ships in the Baltic Sea. The largest of these was the Russian armored cruiser Pallada, which was destroyed in October 1914 in the Gulf of Finland, taking down a crew of 600 with it.

The Badewanne diving team found the wreck of Pallada a couple of years ago. U-26 went missing in the Gulf of Finland in August 1915. The Germans have been trying to find out what happened to the submarine but the U-boat's fate has remained a mystery until now.

The submarine disappeared without a trace, with its location remaining unknown. It went missing with its entire crew of 30.

Jouni Polkko estimates that U-26 never made it out of the Gulf of Finland but was hit by a Russian mine which had been laid to prevent the German Navy from entering the Gulf.

Polkko says that the wreck has great historic value as it is probably the world's best preserved wreck of a World War I U-boat.