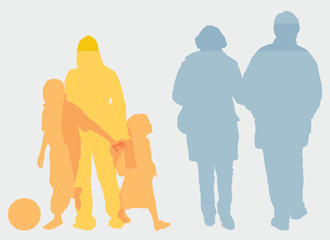 Children are more permissive about age limits, a survey by Helsingin Sanomat finds.

CHILDREN can stay home alone for one night at the age of 12, if you ask children and young people. Adults, in contrast, believe children are not old enough to spend the night alone at home until they are 13.5 years old.

Children believe it is appropriate to start wearing make-up at the age of 11.5, while adults consider it inappropriate for children under 13 years old, finds an online survey conducted by Helsingin Sanomat.

In addition to the nearly 13,000 people who responded to the survey online, the daily asked the questions from 250 children of various ages across Finland.

Overall, the survey shows that adults prefer higher age limits than children on a number of issues.

"Many questions in the survey can seem cool in the eyes of children, and they tend to think about them from the viewpoint of freedoms. Adults, in turn, think more about responsibilities and even dangers," estimates Sinikka Aapola-Kari, a senior researcher at the Finnish Youth Research Society.

The division is visible in, for example, the views of the respondents on whether it is appropriate for parents to read the messages of their children – a question that seemed to anger several young people.

"They highlight the freedom of speech and secrecy of correspondence. From the viewpoint of parents, the emphasis is on the discussion on the dangers of the Internet. It would be crucial to discuss the reasons behind the concerns."

Emmi Kotiharju, Sara Laakso, Timi Malinen and Elias Riihelä, eight-graders at the Maunula Primary School in Helsinki, notice that the views of adults and children on age limits are relatively close to one another on the majority of questions.

On the other hand, they are unsure why children should not be allowed to play with whomever they want.

"And it's not your own money, if you can't decide how to spend it," adds Malinen.

The survey indicates that children and young people would allow themselves greater freedom on private issues, such as clothing and friends, views Tatjana Pajamäki, the director of assisting phone services at the Mannerheim League for Child Welfare.

"Adults should indeed respect the opinions of children on these issues," she says.

Aapola-Kari in her doctoral dissertation on developmental phases observed that young people consider a number of age limits inconsistent. For example, children are required to buy adult tickets for buses before they turn 18 but are usually not allowed to move freely.

"The age limits determined within families are unique and take into account a number of issues. The lack of unequivocal guidelines on what is permissible at a certain age can perplex both young people and adults," she says.

"It's nevertheless good that Finland has not sought to determine such age limits through legislation."

The eight-graders in Maunula reveal that they only seldom fight with their parents about age limits.

Riihelä has, however, wondered why he is not permitted to spend the night alone at home. "What's the difference whether it's day or night? I sometimes spend the days home alone," he points out. Kotiharju, in turn, views that she has been allowed more freedom than her peers on a number of questions. "I think it's a sign of trust."

At what age should kids be allowed to do this?
Children and parents designated age limits for kids’ activities