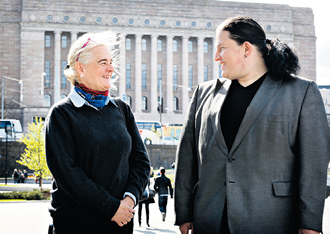 A CITIZENS' initiative calling for the abolishion of mandatory Swedish tuition sparked a thorough and heated debate on language policy at the Finnish Parliament on 15 May.

Overall, the initiative received statements of support from 62,000 Finnish citizens. The abolishion of mandatory Swedish tuition, advocates of the initiative argue, is justifiable on grounds that Finns' ability to learn English deteriorates because they are obliged to learn a minimum of two foreign languages.

"There is not a similar requirement regarding a language spoken by a minority in any other country of the world," the sponsors highlight in the initiative.

Advocates of the initiative similarly argued on 15 May that Swedish tuition should be made optional because mandatory tuition erodes student motivation and, consequently, yields inadequate results.

The Finns Party expressed their backing for the initiative, with Pirkko Ruohonen-Lerner claiming that Sweden has a competitive advantage over Finland because while Finns study Finnish and Swedish – both of which are relatively rare languages – their Swedish peers study Russian and Chinese.

"That is a massive waste of resources and a big flaw. The language skills of Finns have deteriorated and our language resources diminished," she argued.

In addition, Ruohonen-Lerner told that she has been contacted by a teacher at a rural school, who said that their pupils confuse English with Swedish and consequently fail to develop a command of English.

The Swedish People's Party (SFP), in contrast, opposes the initiative firmly. Stefan Wallin (SFP) reminded that Sweden remains the most significant destination for Finnish exports – and also took the initiative as a personal insult. "Swedish is an important language for business, recruitment and social occasions," he viewed.

"Swedish is the language of my father and a crucial part of my identity. Therefore, attempts to erode the position of Swedish at schools and in Finland hit a sore spot."

Finns, he added, would take deep offence to a campaign that would send a message such as "Finnish is no longer important, gets in the way of other learning and is, in fact, utterly gratuitous".