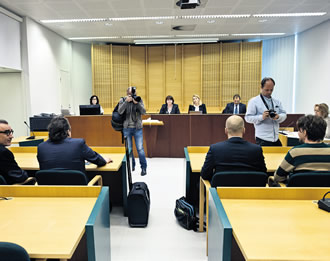 The defendant insisted in court that he had no intention of killing philosopher Esa Saarinen.

THE YOUNG man accused of stabbing Esa Saarinen, a professor of applied philosophy at Aalto University, has revealed that his objective was to whip up media attention. "The primary goal was to make headlines," he said during the opening hearing of the trial at the District Court of Espoo on 19 May.

The defendant also revealed that his objective had been to damage the reputation of Saarinen.

The man has pleaded guilty to aggravated assault but contested the charge of attempted murder brought against him, insisting that he had no intention of killing Saarinen.

In early March, the defendant bought a frontier knife from an outdoor shop on Yrjönkatu, Helsinki, took a bus to Otaniemi, Espoo, and attacked Saarinen. He kept the knife in his pocket, out of its sheath, already before the attack, according to the prosecutor.

In court, the defendant revealed that he only came up with the idea for the attack upon arriving at the scene of the crime. "I was infuriated when I saw Saarinen, and the situation became physical," he told.

"Just one jab," he described the incident. "It was by chance that the knife hit where it did."

The attacker did not attempt to flee the crime scene after the knife had been wrestled out of his hands but remained there, in his own words, to talk about love and the contents of Saarinen's lectures.

He underlined in court that his intention had not been to kill Saarinen but to give the media something to write about. As an example, he referred to the incident in which a young man brandished an edged weapon while addressing Prime Minister Jyrki Katainen (NCP) during a campaign event in Turku in late 2012.

In addition, the accused cast the blame on his drug use. "I've used hard drugs," he said.

In a statement drawn up prior to the hearing, he also expressed his regrets for the injuries suffered by Saarinen – a stab wound in his mid-section that required surgical intervention and a cut in his hand. The thick leather jacket worn by Saarinen, the prosecutor believes, protected him against the knife. That, in addition to the intervention of by-standers, may have saved his life.

Saarinen told in court that after the incident he has been more tired and reluctant to take on certain projects. Before the hearing, he said to reporters that the ordeal has proven more taxing than he had first imagined.

He is not, however, demanding a punishment for the defendant.

The defence has demanded that a psychological examination be conducted on the suspect, arguing that he was incapable of sound judgement at the time of the incident due to his reduced or utter lack of realism.