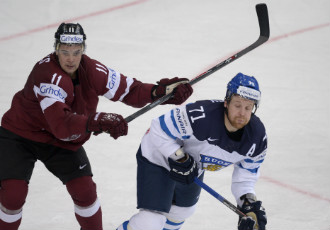 Finland lost their first game of the preliminary round at the 2014 IIHF Ice Hockey World Championship in Minsk, Belarus, succumbing to a 2-3 loss at the hands of a dogged Latvian side on Friday evening.

The energetic Latvia domineered the proceedings virtually throughout the game and ultimately capitalised on the power-play opportunities gifted to them by a disorganised Team Finland.

“You can't win with so many penalties. You can't sit in the box that much and win,” acknowledged Erkka Westerlund, the head coach of Finland, in an interview with MTV Sport.

In particular, the fouls committed by Finns in the third period proved costly, as Latvia turned the game around with two power-play goals.

Latvia first equalised through a goal by defenceman Kristaps Sotnieks while Petri Kontiola was serving a tripping minor and then, half-way into the final period, grabbed the 3-2 lead, Arturs Kulda finding the back of the net while Veli-Matti Savinainen was in the penalty box for slashing.

“We lacked unity. We couldn't play as a team,” Westerlund speculated after the shocking loss.

Finland had begun the game brightly, however, as Miikka Salomäki scored his début goal in the national jersey to draw first blood less than five minutes into the first period. His goal was cancelled two minutes later by Kaspars Daugavins.

In the second period, Latvia tightened their grip on the game, not allowing Finland a single shot on goal in the first ten minutes. Finland had to rely on their penalty kill – and especially on goaltender Pekka Rinne – as they were short-handed five times in the period.

“We have the first game under our belt, but we have to be concerned about our play,” Rinne stressed in an interview with MTV Sport.

A ricocheted shot by Kontiola then granted Finland the 2-1 lead, which they were unable to hold on to in the final period.

“It was a difficult game, […] an awful start to the tournament,” Rinne conceded.

Finland will continue their preliminary games tomorrow at 9 pm with a difficult clash against Russia.