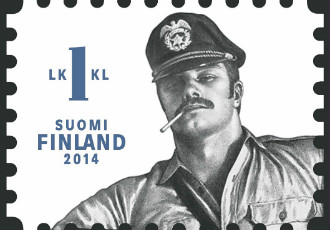 Posti has received orders for both single sheets and larger quantities of the Tom of Finland stamps especially from the United States, Germany and Sweden, reveals Petri Pohjolainen, the product manager of stamps at Itella.

Consisting of three stamps, the sheets were made available for pre-order through the Posti Online Shop in late April due to the unprecedented interest they had aroused abroad.

Within a couple of weeks tens of thousands of sheets have been pre-ordered. More specific estimates, however, are unavailable because the sales continue to grow steadily, Pohjolainen reminds.

The pre-ordered stamps are to be delivered to customers on 8 September, the official release date of the Tom of Finland stamps. Posti will initially print 200,000 sheets of the stamps, but Pohjolainen assures that the stamps will be available to customers also in the autumn.

“If necessary, we can increase the print run. The objective is that when the stamps are published in the autumn, they will be available at Posti shops.”

As Finnish stamps cannot be used to send mail from abroad, foreign buyers typically buy them as souvenirs or collectables. Previously, Finnish stamps have stirred notable global interest in 1999, when a sheet was published to commemorate the Formula One championship title of Mika Häkkinen.

Tom of Finland was the pseudonym of Touko Laaksonen (1920—1991), an artist, gay pride icon and stamp collector, who remains one of the most recognised Finnish artists abroad. The decision to issue the homoerotic stamps kindled a fierce public debate in Finland that also reached the galleries of the Parliament.