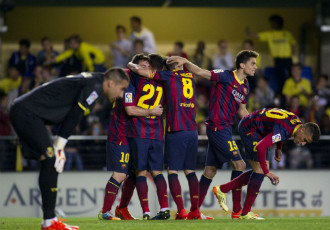 This could be the biggest news of the summer for Finnish football fans: HJK are rumoured to face FC Barcelona in Helsinki in August.

Mundo Deportivo, a Spanish newspaper, reports that Helsinki is a pre-season destination for the illustrious Catalan club. Why Helsinki? Because temperatures in Finland are not too extreme and because FC Barcelona are wary of exhausting their players by organising a tiring pre-season tour abroad, especially after the World Cup.

The Spanish daily writes that FC Barcelona are set to face local teams in Nice, Geneva and Helsinki during their pre-season campaign.

Information obtained by Helsingin Sanomat suggests that HJK, the reigning champions of Veikkausliiga, have indeed held talks with the Catalan club. “I will not comment on unfinished matters,” stated Aki Riihilahti, the CEO of HJK.

It seems unlikely that HJK would face FC Barcelona at the Sonera Stadium due to its modest capacity of some 11,000.

The Helsinki Olympic Stadium, in contrast, would seem the obvious venue for a sporting event of such magnitude. At present, the main venue of the 1952 Summer Olympics is on 2 August scheduled to host a game dubbed the August Classic between Scotland's Celtic and a yet-to-be-named English Premier League team.

Maija Innanen, the CEO of the Stadium Foundation, declines to reveal whether the foundation has received more than one application for the use of the stadium for a football match in August.

Meanwhile, Infront Finland, a company specialising in sports marketing, has announced that it is set to organise a follow-up to last year's Super Match between Arsenal and Manchester City in the Finnish capital. Hjallis Harkimo, the board chairman at Infront Finland, however refuses to comment on the rumoured FC Barcelona game in Helsinki.

“This has nothing to do with the project of Hjallis Harkimo. This is a HJK project,” said Olli-Pekka Lyytikäinen, the chairman of HJK.