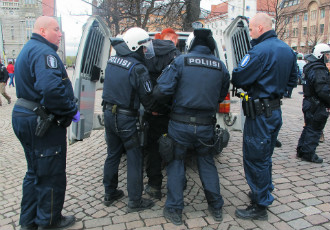 A number of left-wing politicians have lashed out at the Helsinki Police Department for measures resorted to during the May Day march.

Police officers, some donning riot gear, on Thursday arrested ten participants of the march – six, rather forcibly according to eye-witness accounts, at the Rautatientori Railway Square; three in Hakaniemi; and one by the Pitkänsilta Bridge. They were all released by 5 pm.

Paavo Arhinmäki, the chairperson of the Left Alliance, demands in his blog that an investigation into the actions of the police be launched, stressing that it is the duty of the police to guarantee the freedom of opinion and assembly, not to restrict them. The seizures of the sticks carried by some of the protesters as offensive weapons, Arhinmäki adds, were unwarranted.

“It is the duty of the police to prevent possible offences and to remove any offensive weapons carried clearly with the intent to cause harm. Regular, thin wooden or plastic flag poles cannot be regarded as such,” interprets Arhinmäki.

Arhinmäki also reveals that in the wake of the events he has been contacted by several people, many of whom regard the actions of police as appalling. According to him, the matter is of such significance that a public investigation into the events must be conducted.

“Police cannot high-handedly prevent political movements from bearing their own symbols. We are used to hearing news of police […] stopping political activities from countries markedly different from Finland.”

The Helsinki Police Department has denied all allegations of excesses or excessive force, highlighting that the people brought into custody have all since been released. “Police were compelled to make the arrests, because the anarchists refused to hand over their offensive weapons,” explains inspector Jari Taponen.

“We used necessary force for the removal. No excessive or exaggerated force was used,” he emphasises. “If you participate in a public meeting or rally with offensive weapons or sharpened sticks, we consider that an obvious dangerous situation.”