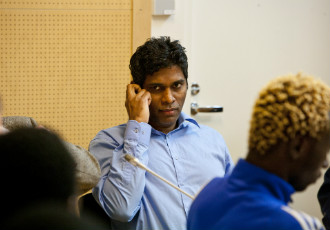 Wilson Raj Perumal, one of the most infamous match-fixers in the world, has been nabbed in Helsinki. Perumal was taken into custody in the Finnish capital last Wednesday at 9.20 pm on an international arrest warrant issued by Singaporean authorities and is currently held in the nearby city of Vantaa.

The now 48-year-old Singeporean national was in 2011 sentenced to two years' imprisonment for fixing matches of the Rovaniemi-based football club, RoPS. After serving one year of his prison term in Finland, Perumal was handed over to Hungarian authorities.

The District Court of Vantaa decided last Thursday to keep Perumal in custody pending the extradition determination. Perumal did not contest the decision but according to information obtained by Helsingin Sanomat appeared before the court in a composed manner.

Under the decision, Perumal will be kept in the Vantaa Prison until further notice to facilitate the proceedings.

The decision, the court explained, was taken to enable officials to conduct the extradition determination and to guarantee and secure the possible extradition. A decision on whether or not Perumal can be extradited for the offence on which the arrest warrant is based will be taken by the Finnish Ministry of Justice at a later date.

Finnish district courts are obliged to re-consider a case upon the request of a suspect in custody within two weeks of the request.

Jari Nieminen, the officer in charge of the investigation at the National Bureau of Investigation, remains tight-lipped about the details of the arrest and probe. “The police will carry out the extradition determination, after which it will be decided whether or not he can be surrendered,” Nieminen commented.

Finnish law-enforcement authorities were led to the match-fixer through international police co-operation.