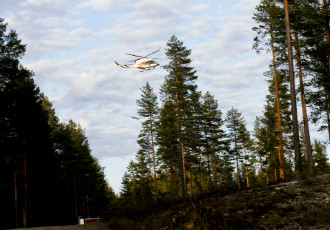 Eight people died when a light utility aircraft carrying parachutists crashed to the ground near the Jämijärvi Airfield in Satakunta on Sunday. The pilot and two passengers aboard the American-made Comp Air 8 were able to parachute from the aircraft in time and only sustained minor injuries.

The authorities held a press conference on Sunday, revealing that they have yet to identify the eight bodies found in the wreckage. The authorities have, however, obtained a list of the passengers on board the aircraft and know the identity of the three people who survived the accident.

The police have yet to contact the families of all the victims but have briefly interviewed the survivors. The cause of the crash, the police have said, nevertheless remains unknown.

The Safety Investigation Authority will examine the wreckage today, while the search for the large object that reportedly fell off the aircraft continues .

Ismo Aaltonen, the chief air safety investigator at the Safety Investigation Authority, has told Helsingin Sanomat that the police have obtained one or several helmet cameras from the parachutists involved. However, it remains uncertain whether or not the cameras contain footage that will help the investigators.

Wexi Korhonen, a founding member of the Parachuting Club of Tampere, is confident that the footage captured by the helmet cameras will prove helpful. “Typically, the person who jumps out of the plane first shoots the jump, so he has footage of the incident. The cause of the tragic incident in Jämijärvi will definitely be determined,” he views.

The incident, the have police revealed, was witnessed by one person, who has said that they saw a large object come off the aircraft moments before it began its plunge. “[The eye-witness] was unable to tell whether it was a wing or another part,” inspector Petri Kangas says.