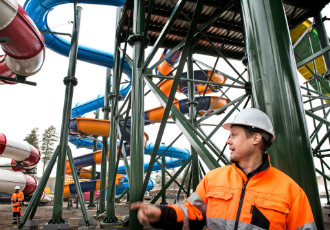 Tykkimäki, an amusement park in Kouvola, has invested notably in the forthcoming summer season, having begun construction on a water park estimated to cost roughly 6.5 million euros. Boasting three large pools, several slides and a one hundred-seater restaurant, the water park is the largest investment in the 25-year history of the amusement park.

The investment is equivalent to 150 per cent of the annual net sales of Tykkimäki.

“People's expectations have grown. Amusement parks are fighting for customers not only against themselves but also against shopping centres. A family in the capital region may be thinking should they go to [the shopping centre] Jumbo or Tykkimäki on Saturday,” explains Sakari Pasanen, the managing director at Tykkimäki.

Other Finnish amusement parks have similarly developed their operations.

In Kauhava, PowerPark has launched construction on a 5,000 square metre shopping centre estimated to cost up to 10 million euros, while Särkänniemi, a Tampere-based amusement park, recently invested over 5 million euros in a new theme park.

At Helsinki's Linnanmäki, the new main attraction is the 75-metre free fall ride, Kingi. Yet, Risto Räikkönen, the managing director at the amusement park, insists that the most important projects in recent years have concerned the development of the overall environment, restaurants and visual appearance.

“The amusement park Liseberg in Göteborg offers fewer rides than us but has three times more customers. Rather than rides, people appreciate variety. Therefore, all parks are under pressure to develop their operations.”

In the 1980—90s, Räikkönen says, rides were by far the most important factor to consider in planning amusement parks. However, it is no longer enough to simply install a new merry-go-around in the winter and open the gates in the spring.

“Today, parks are developed for all population groups, also for the needs of pensioners. In the 1990s, senior citizens were not active in the way they are today,” confirms Miikka Seppälä, the managing director at Särkänniemi.

The managing directors do not, however, see exactly eye to eye on the competition situation. Räikkönen believes the parks compete primarily against the comforts of home, entertainment electronics and other free-time activities.

Seppälä, in turn, points out that 26 per cent of the customers of Särkänniemi come from the Uusimaa region – geographically from the turf of Linnanmäki and Tykkimäki.

“Good parks are advertisements for the entire sector. When Linnanmäki is doing well, we typically see it here, in a positive sense. In that sense, we are good competitors,” continues Seppälä.