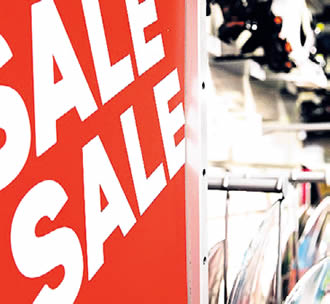 Malaise in the retail sector has spread also to retailers located close to city centres, says Jaana Kurjenoja, the chief economist at the Finnish Commerce Federation. "The decline in sales has for a while now pestered regional centres. Today, the erosion of purchasing power is also felt in city centres," Kurjenoja says.

Purchasing power has deteriorated in the regions due to urban migration and in southern population centres due to a decrease in the disposable income of residents.

Consequently, Kurjenoja estimates, the number of people employed in the retail sector will fall by 5,000 and in the entire commerce sector by 6,000 people. "I wouldn't be surprised if the outlook darkened even further. At present, it looks like the decrease may be greater," cautions Kurjenoja, who is to unveil the new outlook in August.

According to Kurjenoja, the shocks witnessed this spring are chiefly attributable to the lingering recession. Although the boom in online shopping has unavoidably contributed to the development, the main reasons lie elsewhere, she views. "Waning economic growth and purchasing power are the real problems. With no money, consumers will look for even cheaper goods."

Online retailers have, however, spurred the development by encouraging consumers to compare products and to shop on foreign websites, which is a problem for Finnish commerce.

While retailers have had to adapt to new pricing expectations, the level of costs in Finland has not changed.

Another new phenomenon is the growing disparity in the quality of retail services. "Where purchasing power persists, the quality of services will remain high. The market will divide so that exclusive shops will not suffer," explains Kurjenoja.