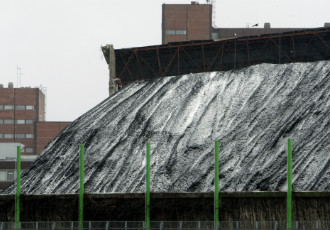 The use of coal in Finnish heat and electricity production increased by over 30 per cent from the previous year to a total of 4.5 million tonnes last year, reports Statistics Finland.

As a result, the country's stocks of coal diminished by 18 per cent year-on-year to approximately 3.3 million tonnes.

The energy policy exercised by the current Government has come under severe criticism for essentially facilitating an increase in the prices of peat and wood chips, and hence the use of coal in domestic energy production.

The Government has admitted its mistake, cancelling in its framework session the additional cut in the feed-in tariffs for wood chips and the raise in peat taxation planned for 2015. In its programme, the Government has committed to pursuing an increase in the tax on peat chiefly due to the Greens' insistence on reducing the use of peat.

The subsequent problem is that whenever the use of peat declines as a consequence of a tax hike, EU competition rules oblige Finland to also cut the feed-in tariffs for wood chips. As a result, the price competitiveness of both energy sources has deteriorated in comparison to coal, the price of which has fallen as the United States has shifted its focus toward shale gas extraction, allowing it to export more coal.

Most recently, the tax on peat and tariffs for wood chips were adjusted at the beginning of this year.

Oras Tynkkynen, the chairperson of the Greens parliamentary group, concedes that the timing of the measures was inopportune. “That's why the Greens proposed in the framework session that the measures planned for next year be called off.”

The emergence of coal as a beneficiary of the competition, Tynkkynen reminds, is also attributable to the price development of emissions rights, a poor water situation in the Nordic countries, the decline in electricity imports from Russia and last summer's modest peat harvest.

“The Greens' goal is still to reduce the use of both coal and peat,” Tynkkynen states.