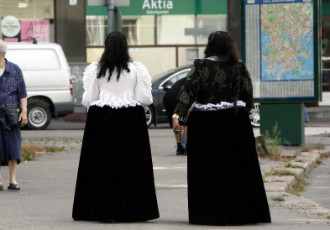 Approximately 68 per cent of the Roma people in Finland say that they have experienced discrimination over the last year, indicates a report published on Thursday by the Ombudsman for Minorities. Most of the discrimination, the respondents tell, takes place in everyday situations, such as shopping.

“Every time I go to a grocery shop, I notice that the store detectives start to follow me. I'm afraid to look at products, if I'm not entirely sure that I'll buy them. Nowadays, I always go to a certain shop, because they know me there, and I'm allowed to shop in peace,” describes a 32-year-old Roma woman interviewed for the survey.

In addition, the survey suggests that Roma people experience discrimination considerably more often than people of Somali or Russian background in Finland.

The EU-MIDIS survey, undertaken earlier by the European Union Agency for Fundamental Rights, found that 47 per cent of Somalis and 27 per cent of Russians in Finland have experienced discrimination over the past 12 months.

The Ombudsman for Minorities interviewed a total of 249 Roma people for its survey.

Nearly half of the respondents said that they have over the past five years faced discrimination when applying for council housing. On the private real estate market, experiences of discrimination were even more common.

Moreover, roughly 54 per cent of the Roma people interviewed said that they have faced discrimination in job-seeking. “I rang the number in a vacancy notice. After I gave my name, which implies that I'm Roma, I was told that the position is no longer available. When I rang the same place with a different name, the position was still open,” tells a 28-year-old Roma woman.