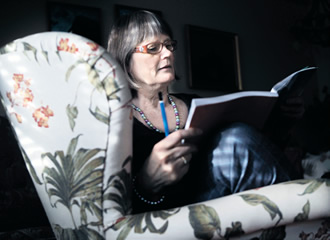 Around ten per cent of Finns do not speak any English. Raija Heikkinen has sometimes pretended to follow an English conversation because she has been too embarrassed to admit she does not understand the language.

Raija Pesu (60) was on her way to a work meeting in Helsinki city centre when she was approached by English-speaking tourists, who asked her for directions to a hotel, with a map in hand.

Pesu felt a flush creeping up her cheeks. She did not know any English.

Pesu pointed her finger towards the hotel and the couple disappeared in that direction, but the feeling of embarrassment stayed with her.

"For years now, young people in Finland have spoken good English. Believing that you're the only one who doesn't speak the language is what makes it so embarrassing," explains Pesu.

She studied English at school for a couple of years, but that was some decades ago and even then she found it difficult to get her head, and tongue, around the language.

"If you mispronounced words you were lucky not to get rapped over the knuckles with a ruler. Teaching style was very authoritarian and everything had to be done just so. The teacher didn't make any allowances for me not getting the hang of the language straightaway. I started dreading everything to do with English," Pesu recalls.

Not only was the Helsinki incident repeated several times over the years, but Pesu also noticed that English cropped up daily at home or in a shop.

"I've got some medicine from the chemist's that didn't have information on the side effects or any instructions in Finnish. Everything was in Estonian and English."

One day a couple of years ago, a work email pinged into Pesu's inbox that she could not make head or tail of because it was in English.

Pesu, who runs an interior design business in Espoo, used to receive information on the Italian fabric provider's collections and schedules via a Finnish agent but now the company had started communicating with their clients directly.

"I suppose they assumed that anyone doing business could speak English. That's when I made up my mind to learn the language, whatever it took. I had to, if I wanted to keep on working", Pesu explains.

She signed up for an English course in an adult learning centre. 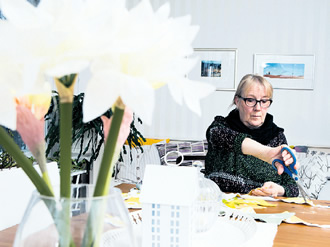 These days, when you pay for your shopping with a card, the machine asks "debit" or "credit", in English.

"Don't lose your protection, it will expire in 7 days," your computer informs you.

"Hi, how can I help you?" an English-speaking voice on the other end of the line replies when you ring a restaurant in Helsinki to reserve a table.

When did it become the norm to expect everyone in Finland to speak English?

In 1992, Ilkka Malmberg, a journalist for Helsingin Sanomat, wrote an article on what statistics revealed about an average Finn. Back then, one in two Finns did not understand some of the most common words in the English language, including 'soft', 'shop', 'high' and 'strong'.

Today, at least two thirds of Finns can speak English and an even larger number understands basic words, thanks to loan words, such as 'shoppailla', 'hengailla', 'drinkki', 'menu', 'printata', 'bisnes' and 'rokki'.

"It is partly because of loan words, that so many Finns understand at least some English, sometimes without even realising it," explains Pirkko Nuolijärvi, the director of the Institute for the Languages of Finland.

The change started taking place between 1972 and 1977 when the new comprehensive school replaced the older education system and it became compulsory to study at least one foreign language in addition to Swedish.

But it was only in the early noughties that English invaded Finns' everyday lives with the increasing availability of the Internet, which brought foreign papers, music and films within easy reach. Nokia, Nordea and many other corporate giants selected English as their working language.

Suddenly a supermarket check-out and a plumber could come face-to-face with a customer speaking English.

Pirkko Nuolijärvi says that English loan words are a natural part of the evolution of the Finnish language and do not give cause for concern as long as everyone understands their meaning. What is more alarming is the exclusive use of English in some spheres of life.

There is a high risk of this happening in the worlds of business and science. When all research and communications are carried out in English, experts find it difficult to talk about their own field in plain Finnish that also laymen can understand.

"Without any English skills, it can be difficult to understand what policy-makers are saying. This can serve to push people to margins. It is thoughtless not to take into consideration that not everyone understands English," says Anne Pitkänen-Huhta, senior lecturer at the University of Jyväskylä.

"Usually I have a stab at figuring out the meaning of a word," explains Raija Heikkinen (62), who lives in Leppävirta.

Once when on a holiday abroad, she tried to order eggs, only to have ice cream served to her. Sorting out the misunderstanding with the waiter proved a rather comical process.

Heikkinen has some English lessons under her belt, both from school and later as part of her studies in social work but she could never muster much enthusiasm for cramming the language.

"I'm a chatty person and when we're on a holiday I'd like to talk to people but I don't have the language skills. It's frustrating sometimes," comments Heikkinen.

Her husband and children act as interpreters while she stands next to them, nodding along.

"There have been many occasions when I've been too embarrassed to admit I don't understand English so I've ended up pretending," she admits, laughing.

"It's a sore point for me. I felt so embarrassed when my daughter's foreign friend dropped by and wanted to have a chat and I couldn't reply."

But most often English is a source of bewilderment when dealing with everyday things, such as shopping for cosmetics, packaging for which may have names and contents only in English.

"I'm allergic to many of the compounds, but often all texts on the products are only in English. Then I'm stumped. I have to google the names at home to see if they can cause an allergic reaction," Heikkinen explains.

Even though most people study English these days, it does not mean that every Finn speaks the language. According to a survey published by the University of Jyväskylä and Statistics Finland in 2009, 10-15 per cent of Finns said they did not have any English skills.

Among the 15-24-year-olds, only less than one per cent of respondents reported not speaking English whereas for the 65-79-year-olds the figure jumped to 39 per cent while 16 per cent of the 45-64-year-olds lacked English skills.

The popularity of the basic-level English courses organised by adult learning centres attest to the picture painted by the statistics. The number of participants remains high year after year, says Heini Tuominen, who teaches these courses at the Espoo Adult Education Centre.

"Many of the students have never studied English, but then there are those who have bad memories of language teaching. Back in the day, teaching methods may have focused on pointing out mistakes. Grammar was emphasised and speaking only played a minor part. One pupil would read a passage aloud while the teacher commented on any mistakes, often arousing mirth in other pupils," says Tuominen.

"Once bitten, twice shy. After a bad experience, people may feel too intimidated to use the language again. Some students grew to think they have no talent for languages because it took them a bit longer to learn it."

But then something has happened to make them give learning English one more go: they have started needing the language at work, their child has moved abroad or they want to be able to have a chat with the locals when on a holiday.

"Most people feel extremely shy to start with. You need the right psychological approach to draw them out and to kick-start the learning process," explains Tuominen.

Why are poor English skills such a source of embarrassment then?

Some of it is down to comparison, according to experts. On an international level, Finns usually have good English skills but the threshold for speaking is also high. In countries like Spain and France, people speak with strong accents and limited vocabulary without feeling overly self-conscious.

Anna Mauranen, professor of English philology and vice-rector at Helsinki University, explains that the feelings of shame related to English language skills may have something to do with the focus of language teaching, which has shifted with time.

"According to studies carried out in the 1940s, a student with talent for languages was an introvert because learning was measured by grammar and translation skills. Then in the 1980s, the approach underwent a sea change, with people starting to think that a good learner is an extrovert who can use the language in conversation."

This change has also affected the criteria for learning goals, according to Mauranen.

"The idea used to be that the discussion partner is a native English speaker and this was used as the yardstick for the learner's skills. Today, English is a global language and we often talk to people who also speak English as a foreign language. What matters is being able to speak with all kinds of people, not speaking perfectly."

The basic-level English course at the Espoo Adult Education Centre has also taught Raija Pesu this, as became evident a little while ago when she received another work email in English, this time from Austria.

"My agents were on a trip and the email needed answering quickly. After I got over my initial shock, I managed to compose a reply. And they sent a thank-you back so they had understood what I said," says Pesu.