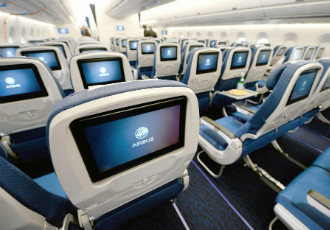 Passengers on Finnair's long-haul services will be among the first in the world to experience the cutting-edge technology aboard the Airbus A350, with the Finnish airline scheduled to receive the new aircraft in the autumn of 2015.

Finnair and Airbus have had to develop a heavy-duty security system to prevent third parties from hacking into the on-board computer system of up to 1,500 software.

“Although today's aircraft are perceived to be computers, this is in a different class due to the security software,” highlighted Jari Paajanen, the head of Finnair's Airbus unit, in his address on aircraft technology during an aviation safety seminar in Helsinki on Tuesday.

One of the new features of the aircraft is a digital signature, which is stamped on all transferable files to ensure that no unauthenticated data can infiltrate the on-board system.

Finnair is set to bring home the first four Airbus A350 aircraft in roughly one year's time, after testing on the aircraft has been completed.

The most recent new large aircraft, the Boeing Dreamliner, has been pestered with recurrent battery problems.

Will passengers aboard Finnair flights have to endure similar teething problems?

“No, they won't,” assures Paajanen. “The aircraft will be flown for a year before the first passenger is allowed aboard.”

In addition, Paajanen calls attention to the fact that the Boeing Dreamliner was developed from scratch, whereas the A350 also features technology used previously by Airbus. “The battery problems have been noticed. The A350 is not expected to experience them,” he reiterates.

Despite the cutting-edge security measures, the pilots can shut down the on-board system from the cockpit. “Thereby, it's possible to avoid the alleged scenario that someone could take control of the aircraft and re-route it to a desert island – although I'm unaware of a single software that could achieve that,” says Paajanen, referring to the theories tossed about concerning the recent disappearance of Malaysian Airlines flight 370.