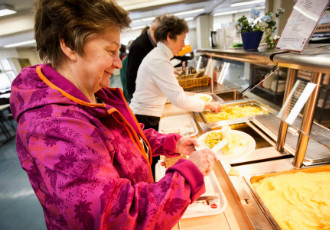 “Leftover food today, welcome,” says a sign attached to the front door of the Kalevala School in Linnanpelto, Kuopio. As the last pupils were finishing what was left of their meals on Wednesday, roughly a dozen patrons had already gathered at the main lobby to wait for their turn.

The school has offered leftover food to patrons for a price of 1.5 euros per meal for three weeks now.

“It's great that the food isn't thrown out but is used for good. This is also very affordable,” said Kaija Jetsonen, one of the patrons lining up as the smell of Baltic herring fillets wafted into the lobby.

The four pensioners have all dined previously at the school, and found the food both delicious and affordable. “The pensions of women are typically smaller, and with lots of bills you have very little to spare. I usually go Nordic walking and then come here to eat,” Happonen said.

The selling of leftover school meals began last autumn in Jyväskylä and has since spread to a number of localities across Finland.

At most, 21 patrons have dined at the Kalevala School during the one-hour lunch-time.

Marianne Kärkkäinen, the head of services at the Kalevala School kitchen, reveals that the entire kitchen staff believes selling the leftover food is a good idea. “This creates no extra work for us, because the patrons come as soon as the pupils have left. We have nothing negative to say,” she tells.

The increasing selling of leftover school meals has sparked discussion and assessments also in the Helsinki region.

The Aarnivalkea School in Tapiola, Espoo, is set to begin selling leftover food in late April, after its pupils proposed that the leftover meals be offered to nearby elderly residents.

Minna Ahola, the managing director of Espoo Catering, says that the pupils have also promised to lend a hand. “It's the responsibility of the pupils to market the food sales. They will also make sure that a sign indicating whether there is any leftover food is attached to the school door.”