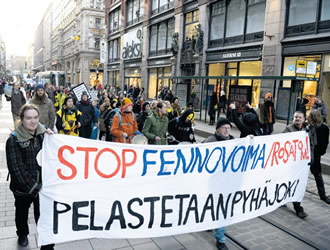 The current Crimean crisis in Ukraine has resulted in Finns having second thoughts about the construction of a nuclear power plant with Russian technology.

Almost half of Finns are opposed to granting a nuclear power plant permit to Fennovoima, which is planning to order the reactor unit from the Russian energy giant Rosatom.

Growing concerns felt by Finns on the issue came out in a TNS Gallup survey commissioned by Helsingin Sanomat.

Only a third of the respondents said that Fennovoima's application for permission to build a new nuclear power plant in Pyhäjoki should be accepted.

The respondents were told that Fennovoima has submitted a supplementary application as in the original application Rosatom was not given as the supplier of the reactor.

The survey revealed that Rosatom's involvement is the factor that sparks negative reactions to the project among Finns.

Respondents expressed much more positive attitudes towards building a new nuclear power plant in general, with just over half in favour of it, while 45 per cent were opposed.

The interviews for the study were carried out between 11 and 12 March, the two weeks after the crisis in Ukraine broke out, giving the respondents plenty of time to have formed an opinion on the situation.

The findings of the survey do not come as a surprise to Erkka Railo, the executive director at Turku University's Centre for Parliamentary Studies.

"The results are not surprising, particularly as the questions are somewhat leading. The respondent is almost directed towards taking a certain standpoint."

Railo believes that that the general public may feel slightly confused about Fennovoima's application.

When permission to build a nuclear power plant was granted on the basis of the original application, it was partly on the grounds of making Finland less dependent on energy imported from Russia. Now, a Russian company is becoming a supplier, shareholder and a funder in the project.

Railo estimates that the updated application will also be passed at parliament as the Centre Party has decided to give its backing to it but the votes are likely to be more evenly divided this time.

Professor Jarmo Partanen, energy market expert from the Lappeenranta University of Technology, declined to comment on the survey, saying that deciding on Fennovoima's application will be a tricky task for Parliament.

"Fennovoima and Rosatom have promised to supply electricity to their clients at the price of 50 euros per megawatt-hour. This is a very low rate, which raises the question of how they will be able to do it."

He compares the partnership between Fennovoima and Rosatom to TVO's deal with Areva in Olkiluoto, where Areva agreed to supply the reactor at a reasonable price, being keen to build a prototype of its new power plant. Now Rosatom has set its sights on gaining a foothold in the Western energy market.

On the other hand, policy-makers must bear in mind that Finland will need new nuclear power even after the work on the third Olkiluoto reactor has been completed in order to avoid energy shortages in the 2030s.

Nearly half of the National Coalition Party voters were in favour of granting permission to Fennovoima's plan. Among the Finns Party, SDP and Centre Party supporters, more people were opposed to the application than in favour of it.

The application garnered the least support among the Left Alliance supporters and the Green Party supporters.