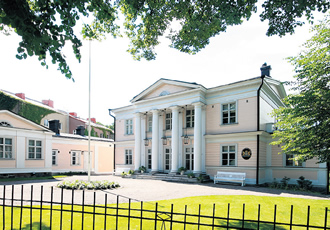 “What I can tell you is that it will be a traditional Dutch meal in three courses, served in style with silver cutlery and all. And we can guarantee it will be delicious!”, says Swarttouw, who commenced his ambassadorial post in August, 2012.

The proceeds of 25 euros per visitor will go towards the Dutch Language and Culture School in Finland. The school is facing financial challenges as the Dutch government announced plans in May to cut back on its subsidies to schools abroad.

It will be the first time for Villa Kleineh to open its doors and take part in the food festival which has been gaining traction in Finland and world-wide in recent years.

First initiated in Helsinki, Restaurant Day has been held every four months since May 2011. Starting with 45 one-day restaurants in 13 cities, the latest edition of August 2013 featured 1,683 restaurants across 220 cities in 35 countries.

For food enthusiasts and culture lovers alike, this will be a rather unique opportunity to catch a glimpse inside the oldest wooden building in the Kaivopuisto diplomats area of Helsinki, and pick up a taste of Cuisine Hollandaise in the process.

“The house is a national monument. I hope we will be able to welcome not only Dutch people living here, but also Finns and other nationalities from in and around Helsinki,” said Mr. Swarttouw.

It is not quite certain who was the original architect of the villa. Carl Ludvig Engel, his student Jean Wik and C.A. Edelfelt have been mentioned. Presumably completed in 1840, a “Bath- and Wellhouse” corporation let the house to summer guests who used to party in Kaivohuone and frequent the Ullanlinna spa.

From 1954 the villa belonged to the Adlercreutz family, which is why it is sometimes referred to as the House of Adlercreutz. After the Second World War, the British delegation of the Allied Commission operated out of Villa Kleineh.

After Henrik Adlercreutz died in 1989, the house stood empty for nearly a decade until Merita-bank, who by then owned the property, first let it to the ambassador of the Netherlands in 1998 and then sold it to the Dutch state.

As legend has it, Villa Kleineh is haunted by the White Lady, the ghost of Louis Kleineh’s second wife. Apparently, she had been far from pleased with the British inhabitants after the war and frightened them out of their wits.

Swarttouw however seems rather unfazed about the alleged ghost. “It all depends on how one prefers to look at it. This is an old, wooden house and one does hear different kinds of sounds which vary with the weather and the seasons. But having said that, I once did meet a lady who used to live here during the 1980s. She was able to describe in great detail what the White Lady looks like, what she wears, her jewelry, everything.”

Just two weeks before Restaurant Day, a group of philosophy students from Helsinki University came to investigate the haunted house.

“They were talking about such things as the semantic aspects of haunted houses and their impact on urban development,” said Swarttouw. “I have to admit, I found it rather difficult to judge how serious these people were. After all, it was the weekend of Halloween.”

As to how the idea to take part in the food festival came about, Swarttouw said: “Well, both my wife and I love to cook. And we’re living in this beautiful house. So we had been thinking for a while how we could do something to combine those two aspects.

“When the Dutch cabinet announced its plans to cut back on subsidies to schools abroad, we had some talks with the Board of the Dutch School in Finland on possible ways to raise funds. It was actually a parent at the school who came up with the suggestion to participate in Restaurant Day.”

Currently running in Espoo, close to a hundred children from predominantly Finnish-Dutch families – within a radius of over two hundred kilometres – come to the school every second Saturday. The school has been around since 1986 and in recent years received funding by the Dutch Ministry of Education, covering about two-thirds of the school’s budget.

According to NOB, the organisation that helps allocate the Dutch government’s funding, the decision to withdraw support affects some 13 thousand pupils across approximately 200 schools in 80 countries around the world.

Parents are already paying school fees and unless alternative funding is found, costs may increase by up to 400 euros per child.