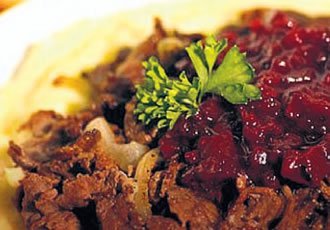 AS CHILDREN, we often used to hear stories about Santa Claus, an old man in red, living in a mystical place called Lapland, far away in the cold and snowy country of Finland. We were also told how this jolly, bearded man would sit on a sleigh, drawn by numerous reindeer, which would magically take off into the starry skies, presents in tow. Every Christmas-loving child could not help but believe in this enchanting tale.

But, thankfully, no one told us that Santa’s cute helpers, the reindeer, were not only useful for sleigh-drawing purposes; they were also used in order to feed Santa Claus and with him, the whole population of Lapland. Sautéed reindeer (poronkäristys), is, in fact, the most famous dish originating from Lapland, and definitely a must-taste for tourists visiting the region and those willing to get acquainted with the truly fascinating Lappish cuisine.

The reindeer men (poromiehet) can be thought of as shepherds, only instead of sheep they are in charge of large herds of reindeers. The indigenous Sami people, a minority representing 0.15 per cent of the total population of Finland, have traditionally undertaken the role of reindeer men, raising reindeer, and then choosing the ones to be used for their meat. Reindeer meat is a true Lappish treasure, as it is tender and includes copious amounts of protein, so-called good fats, minerals, and vitamins. Nutritious as it is, reindeer meat thus provides a perfect way to fight the Arctic cold! 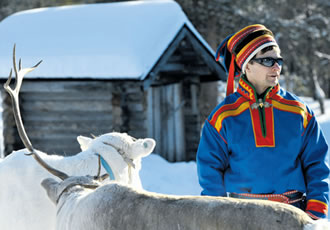 Of course, it is not enjoyed raw, but is prepared in many different ways, one of which is sautéeing. This dish is very simple, being completely built around its main ingredient, which steals the show with its characteristic taste. The recipe for preparing it is astonishingly simple, and recommended for those curious to find out what reindeer meet tastes like: it just takes good-quality meat and a bottle of dark beer to make an absolutely delicious sauté!