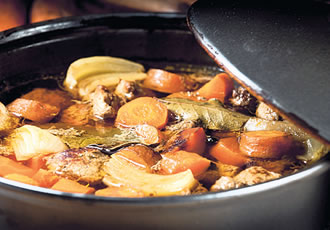 A favourite from the east a sure way to keep the cold at bay.

KARELIA, the historical province of eastern Finland, is the place of origin of the Karelian pie, a delicious rye-based pastry which has a very special place in Finnish peoples’ heart. However, this place is not exclusive, as another local dish competes with the Karelian pie for the ultimate honour of being the number one Karelian delicacy. Its name is Karelian stew (Karjalan paisti) and it has all the elements necessary to make it popular, not only excelling in taste but also being deeply connected to one’s personal values, including family and tradition. Easter in Finland is synonymous with peaceful, family gatherings, a time when a steaming-hot pot Karelian stew is never missing from the festive dinner table.

This dish can be considered as one of the milestones of Finnish cuisine, as it can be traced in the ancestral Karelia, part of which now lies in Russia. This extraordinary culinary conception of many years ago reflects, by its simplicity, the spirit of the times and the lifestyle of the Karelian population. The scarcity of meat made it so that preferably all edible parts of an animal where used in its preparation, such as the liver and the kidneys. In fact, purely meat-based versions of Karelian stew were reserved only for prominent occasions, until meat became more readily available in the 20th century. 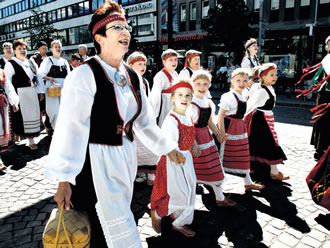 Meat, then, is the main ingredient; all you will need in addition to this is basically some onions, carrots and a handful of spices. It may sound rather miserly, but the secret here lies in the cooking time, where the “longer the better” is the main principle. Traditionally, letting the dish to slowly cook over night in relatively low heat (100 degrees Celsius) was the way to go. Nowadays, cooking time has considerably decreased, but a whopping three hours is still the minimum.

This absolute Finnish classic dish is very easy to make, so here is your chance to elate this weekend’s guests by offering them an unforgettable taste experience!