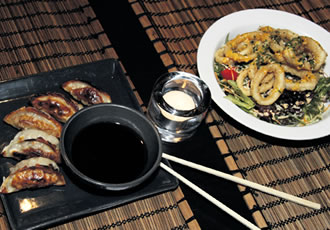 Hoku has high-quality Hawaiian food in a cosy atmosphere.

IN RECENT years Helsinki has become no stranger to ethnic restaurants; Thai, Italian, Indian and Japanese abound. But Hoku, opened early last year by Hawaii-native Ryan Shibuya, can claim to be one of the very few Hawaiian diners in Finland.

Hoku is a small casual restaurant located in the Helsinki Punavuori/Eira district and founded by Ryan Shibuya. Ryan was born and raised in Hawaii and wanted to share some of the great food from back home. He offers nothing fancy, just good food in a casual environment.

Ryan is one of the third generation of Japanese immigrants to Hawaii and Hoku means star in Japanese; a short and catchy name, as he explains. “I wanted my family to be part of this so I asked my mother to help me with the name. Finnish language is difficult and I wanted a name which is easy to pronounce.”

“I wanted a place in a family area. Here it is quiet, you don’t see many people and there is no traffic,” says Ryan explaining why he chose the quiet Punavuori district for his restaurant.

Hoku is a small, cosy place, with small tables and comfortable chairs that are perfect to enjoy a meal in a relaxed atmosphere. Its corner location also allows you to watch the world go by as you enjoy your food.

Ryan explains that Hawaiian food is a fusion of Chinese, Japanese and Korean food. People from these countries moved to Hawaii to work in pineapple and sugar cane fields and so Hawaiian food has evolved with these influences. “The menu here is what I grew up with and I wanted to bring some of them here,” says Ryan.

Ryan has succeeded in finding fresh and authentic ingredients from Asian food markets and quality local producers. The ingredients such as rice and vinegar are provided by Asian food stores. Reinin Liha, one of the biggest fresh meat providers, and Eriksson Kalatukku, the fish company, are two of Hoku’s main sources of fresh local produce. 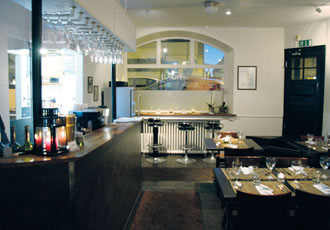 Seafood & stuffed kuha (zander) with lup cheong (sweet Chinese sausage), snow crab and prawn, is a dish in which Ryan employed his French cooking skill to come up with an extremely delicious main dish. He says the dish is going to be the most popular one.

“If you go through the website Eat.fi and look at the food quality ratings, Hoku is among the best,” says Ryan. Additionally, Hawaiian beer and Californian beer are on offer – beers that cannot be found on the Finnish market, and make the experience with the restaurant exclusive.

“Most of the dishes here are unique, we give people something they probably have never had before or maybe they had it somewhere but here is prepared differently,” Ryan states.

Gyoza pork-filled dumplings are a popular Japanese starter that is served with a vinegar-soy sauce and chilli oil. Calamari salad is a Mediterranean-influenced starter that contains fried crispy calamari on mixed salad. The overall casual style of the restaurant, as well as the welcoming staff, contributes to the comfortable feel of the place. Definitely worth a visit.