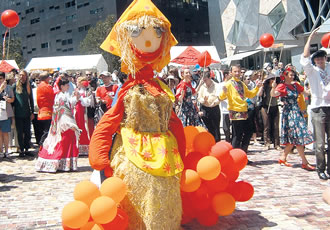 Get your perfect Russian winter snack at Blini weeks.

THE blini, a round, thin pancake of Russian origin, is a worldwide phenomenon of a pancake, having been adopted by numerous ethnicities apart from the Russians, and enjoyed daily by thousands, if not millions, of people. However, the blini culture can be summarised in three simple words: tradition, taste and versatility.

Tradition, because blinis have been an essential part of Russian cuisine for centuries, reportedly being over a thousand years old! During the pagan sun festival of Maslenitsa, celebrated to this day and also known as Butter Week or Pancake Week, the blini plays a prominent role – round and golden, it symbolises the sun and the promise of a new beginning as the long winter comes to an end.

Taste, because the blinis are made with pure ingredients with no extra additives. Served immediately after frying, they are irresistible while still fresh, straight from the pan.

Versatility is displayed by the endless possibilities to accompany a blini. The most traditional combination is, perhaps, blini topped with smoked salmon and sour cream (smetana), but the sky is the limit – anyone care for a blini topped with tartar of cold smoked reindeer? For those with a sweet tooth, blinis will not disappoint, as they can be served with condensed milk, jam, or honey.

In Finland, it’s now blini season at its best! The renowned Blini Weeks (blini-
viikkot) is a yearly event that takes place for several weeks during January, February and March – depending on the restaurant. Dozens of restaurants from all around the country participate in the event and celebrate the deliciousness of blinis by presenting a menu filled with a dazzling variety of blini assortments. This is an excellent opportunity to experience the great taste of Russian blinis without even leaving Finland.

For all year round blini-pleasure, you might also want to try the following recipe and prepare yourselves to enjoy one of the best blinis you have ever tasted!