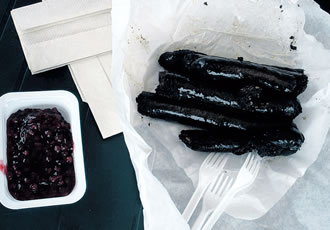 THE black sausage (musta-makkara in Finnish) is a one-of-a-kind delicacy originating from the city of Tampere. Despite its vast popularity, its unconventional appearance might shock the first-timer. Its black colour may be quite uninviting, and might even provoke apprehension.

In reality, after a first encounter with the black sausage, it is likely to become less of an unknown, bizarre black thing, but rather an appetising snack.

Black sausage is made by mixing pork, pig’s blood (the source of the black colour), crushed rye and flour, after which it is stuffed into the intestines of an animal. At the time of its appearance, as early as the 16th century, it was cooked over a small fire, in a hot cauldron or in an oven. Nowadays, black sausages are usually fried and produced in bulk by companies such as Tapola and Savupojat, or sold fresh at kiosks and marketplaces all around Tampere.

Actually, Tampere’s culinary heritage is, if not built around, very closely related to the black sausage. It was in fact a Tampere native who, being very well aware of how good it tastes, personally delivered to renowned chef Anthony Bourdain a whole Styrofoam box full of fresh, steaming hot black sausages while he was having a drink at a bar located in downtown Helsinki. Bourdain dipped the sausage into plenty of lingonberry sauce and bravely took a bite, washing it down with a sip of vodka instead of the traditional ice-cold milk. His reaction was simple, but clear: “Good.”

Many others praise the black sausage as well, claiming that it tastes just as good as any other Finnish sausage – the hardest part is just to muster enough courage in order to try it. For those convinced to do so after reading this article, here is a tip: even though supermarkets provide the easy solution, for an optimal black sausage tasting experience, a visit to Tampere is highly recommended. Black sausage, lingonberry jam and cold milk: it cannot get any more Finnish than that!