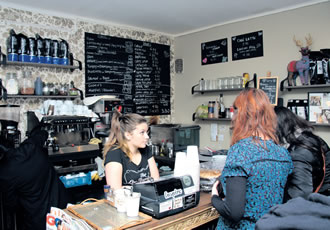 Brooklyn Café brings a taste of New York to Helsinki.

A LITTLE less than a year ago, two girls from New York decided to introduce the taste of Brooklyn to Helsinki residents by opening their own cafe.

Being daughters of an entrepreneurial family, Sharron and Brenda Todd dreamt of owning their own cafe since childhood. As the sisters grew up, they started to make real plans for fulfilling their dream, but carrying them out seemed to take forever.

One night, the sisters started to think about their future and realised that they were afraid of having to spend the rest of their lives being scared of the risks of opening their own business. Finally, when they travelled to Helsinki to meet some friends, their plans took the turn they had been waiting for.

“We found out that Finns are the biggest coffee consumers in the world. So when we came to Helsinki, we saw the need for bagels and strong coffee in a cafe. This was the perfect place to start Brooklyn Cafe,” says Brenda, the younger of the two.

The sisters admit that they were a little scared about opening their own business in the beginning. However, their genuine love and passion for their idea kept them believing in themselves.

“We’re doing something that truly represents us and our visions, and who we are. We’re not just pleasing people by doing something superficial, because when you do things you don’t actually believe in, you’re bound to fail,” Sharron says.

The two sisters wanted to serve food that represents and tastes like their world. The sweets in the shop are baked using Brenda’s recipes from childhood, and the cafe’s specialty bagels have a unique homemade New York flavour.

The Todds wanted their place to feel almost like a living room for their customers. They wanted the place to be filled with the smell of coffee and joyful conversation so that, as they describe it, it would always feel like Sunday morning.

Not surprisingly, the comments on the café’s Facebook page praise the place for its warm and cosy atmosphere, describing it as a smile-maker and the saving of the day. Some even say it has the best service in town, which isn’t hard to believe after chatting with the adorable Todds. They’ve also noticed a pattern in Finnish service culture that they are determined to break.

“It feels so embarrassing when you walk into a shop and say hi to the people working there, but don’t get a response. Our place is about the people and making them feel like they are always welcomed, because they truly are. That’s why we try even more,” Sharron explains.

The girls have accomplished more in a year than they thought they would. After a great first year, they are already looking far ahead.

“Expanding our business is a definite possibility. At the moment we’re planning the concept of a diner, where you can have real pancakes, for example. We’re also expanding to a bakery, for which we are looking for a proper space,” Sharron says.

The girls describe coming to the cafe as the cheapest vacation a person can get, and think the taste of Brooklyn worth introducing to other Europeans as well.

“We’re also thinking about opening a similar café somewhere around Europe, since we already know how to do it. So maybe Copenhagen or Stockholm will have the next share of our dream,” Brenda ends.