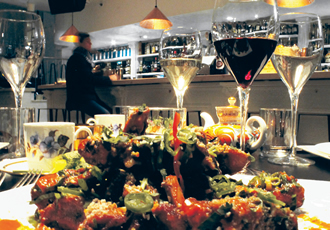 Peruvian food with Asian influences, cocktails from teacups and a nightclub atmosphere – this restaurant not only provides excellent cuisine but also promotes both historical and ecological values.

Even the most callous restaurant reviewer and experienced culinarist in Helsinki would get excited about this: there is a Peruvian restaurant in town. Pastor on Erottajankatu has been renovated from the space previously known as Cuba! nightclub into a sophisticated and stylish diner, which seats 150 people. The atmosphere is almost posh, yet relaxed. In other words, one gets the fine dining experience and easy-going, professional but uncomplicated service all at once.

The multifaceted feel stretches also into the interior design: the overall image is light and clean, Northern-style and modern. Yet, as it turns out, second-hand has been a major driving force behind the designing of the place.

"The chairs are old school chairs," restaurant manager Pekka Koiranen reveals. Taking a second look, I realise that, indeed, they do seem strangely familiar. The chair design, having formed an integral part of the schooling experience for numerous Finnish children, works perfectly with this concept, too. The second-hand theme is repeated also with the drink lists, which are tied inside old book covers.

The bartender recommends me to try a cocktail. Having just told him that I like my cocktails quite fresh and zesty, the beautifully prepared drink, Zawinul chai, arrives, responding perfectly to the request. Containing lemongrass-infused vodka, jasmine, lime and ginger ale, the cocktail makes an interesting mixture of great tastes exactly to my liking. An additional fun factor is that it arrives in a traditional English-style teapot. As I sip my delicious cocktail from a rose-patterned tea cup, the restaurant manager tells me that besides wanting to do something distinctive with serving the cocktails, the second-hand thinking shines through here, too:

"The tea pots and cups are all recycled and have been given a new life in Pastor."

I applaud the place silently for its green values. If someone still thinks that second-hand equals worn and scruffy, Pastor will prove you wrong. The general feel is very fresh and funky. 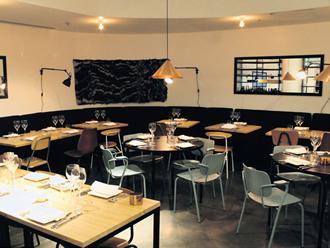 Leafing through the menu, one easily faces a difficulty in making the choice. Each dish sounds more exotic than the next: Nigiri, Atún, Anticuchos. Ingredients include chilli, lime, avocado, ginger and Peruvian asparagus, among others. The website summarises the idea behind the dishes on offer as follows:

"Our inspiration comes from the Peruvian kitchen, where the food is really fresh and the flavours are strong and rich. The 'nikkei' tradition mixes the cuisine of Peru with East Asian ingredients; add to this a few Spanish influences and we came up with a unique mixture we really like."

Head chef Andrew Ayre has prepared the most popular dishes of Pastor for me to try. The starter is called Nikkei ceviche, a cold dish that combines whitefish, red onion, jalapeño chilli, yuzu and coconut tiger's milk. The plate is simply a piece of art. To the extent that you wouldn't want to lay your fork on it as you feel you'll ruin something precious. Following a moment's admiration, however, I tuck in. The flavours of Nikkei ceviche are very fine and delicate. The beautiful starter does exactly what it's supposed to: cuts the edge of my hunger but also sets the bar very high for the main course to follow.

The name Pastor raises some curiosity, as it does not clearly hint that the cuisine would originate from Peruvian and Asian cultures. The restaurant manager tells that behind the name lays a historical factor:

"The first school for both boys and girls in Finland was founded by Pastor Broberg at the end of the 19th century, and it used to be in this very building. We liked the idea of having a name that signifies something."

The main course, Costillas de cerdo, arrives, containing long-braised pork ribs with tamarind glaze, Szechuan pepper and peanuts. And they are wonderful – my expectations are met with such ease. Tender and tasty, with the twist in flavour brought on by Asian herbs, these are some proper quality ribs. And they are plentiful – so plentiful that I seriously struggle in emptying my plate. However, for those with a big appetite, it is the perfect dish.

As I digest my meal, Koiranen tells more about the concept of Pastor.

"The idea has been to create a combined restaurant-nightclub for the weekends. On Fridays and Saturdays, we are open until 3am. There's also a DJ playing. The bar is very well equipped: there are 200 different wines on offer and an extensive list of cocktails." 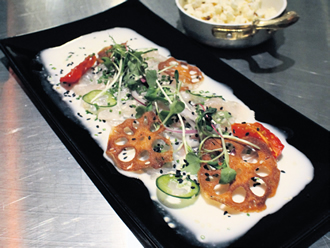 Although the restaurant business is currently being badly plagued by the poor economic situation, it seems that the troubles have not reached Pastor. Straight after opening, at 5 pm, the doors go constantly as customers keep flowing in.

"Since opening in August, we have been fully booked pretty much constantly," Koiranen says.

"Monday and Tuesday are a bit quieter but the rest of the week we are buzzing. Luckily, we have not been affected by the economic downturn here at all."

Another stylish plate arrives on our table in the form of a dessert called Blanco. This time, I have roasted white chocolate mousse, caramelized banana and toffee ice cream on my plate – another visually beautiful piece of art. I find it as the perfect ending to my meal: very sweet with different textural elements of crisp banana slices, soft mousse, biscuit crumble and edible flowers. At this point, I could have not asked for more. However, some people with a serious sweet tooth might find the dish a bit inadequate as it is rather small in size.

The day of the week I visited the place was Thursday. The restaurant was busy, service excellent, and atmosphere uplifting and glamorous. I get the feeling that Pastor would be at its absolute best during weekends – seems like the perfect place to start your night before going out clubbing. I'm already planning my next visit in the very near future.